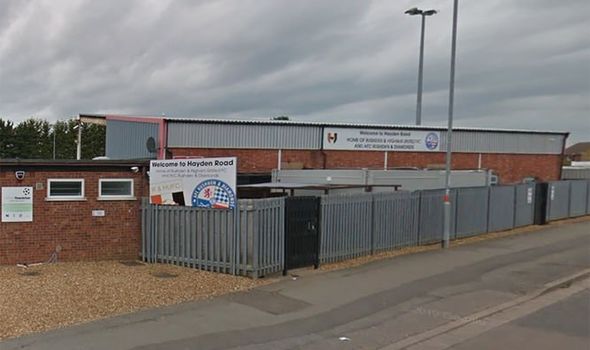 Clive Williams, 69, admitted the racial abuse of Kai Williams at an AFC Rushden & Diamonds game against Barwell FC. His slur came months after the Black Lives Matter movement had become globally recognised, and when professional footballers had started taking the knee before games across the country to show unity against racism.

The victim said the incident made him feel disappointed that, in this day and age, people could be subject to racial abuse

A court heard Kai Williams alerted the words to the referee but the abuse had affected the player so much he had to be substituted.

Northants Live reports Williams left the game voluntarily but gave his details to staff at the game and was spoken to by the police, where he apologised for his behaviour.

Northampton Magistrates’ Court heard supporters at the non-league game confronted Williams after his remarks, which happened in the second half of the 1-1 draw in September last year.

Neil Hollett, prosecuting, said: “The match kicked off at three o’clock in the afternoon. At about half-past four in the second half, one of the players for Rushden and Diamonds was awarded a free kick.

“The victim was concentrating on this when he noticed one of the spectators looking at him.

“He heard him say ‘Black Lives Don’t Matter’, with the match immediately stopped after players brought it to the attention of the referee and the linesman.”

Many others in the crowd also told Clive Williams to “get out of the ground” after hearing the comments.

Mr Hollett added: “The victim said the incident made him feel disappointed that, in this day and age, people could be subject to racial abuse.

“This is his job. It should be a fun sport for both players and spectators and he’s been greatly affected by the incident.

“He feels the individual should be made an example of. It has affected him emotionally and mentally, as well.”

The player also said the incident “knocked him off his performance” for the rest of the match, the court heard.

The court heard from the defendant’s solicitor who said he is a “gentleman who has spent many years following non-league football” and has no previous convictions.

Laura Illingworth, defending, said: “He was frustrated by some decisions that were being made or not made by the referee.

“He thought some of the behaviour from the opposition players was unacceptable but he accepts his language was repulsive.

“As soon as the words left his mouth he was immediately remorseful and he wished he could take them back as he immediately regretted them.”

The court heard it was “very out of character” for him and he’s been to a “million and one matches and he’s never acted anything like this before.”

Miss Illingworth added: “This isn’t a racist man but sadly someone who has acted impulsively and let his frustration find its way out of his mouth before his brain has engaged.”

AFC Rushden & Diamonds is a so-called phoenix club set up in 2011 after the original club, who were once in the Football League, fell into administration and folded.

Anti-racism football campaign group Kick It Out reported 446 incidences of racist abuse during 2019-20.

That was a 42 per cent rise on the previous season – despite hundreds of matches being played behind closed doors or postponed because of the pandemic.