LONDON — Prime Minister Boris Johnson was already facing a treacherous week as he weighs whether to strike a Brexit trade deal with the European Union. Now, Mr. Johnson faces pressure on another front, after his government on Monday imposed tighter restrictions on London to curb a flare-up of the coronavirus.

That abrupt decision, announced in Parliament by the health minister, Matt Hancock, will close pubs and restaurants in London, effective Wednesday. The move comes just 10 days before Christmas, and could drive away the shoppers who normally throng Oxford and Regent Streets this time of the year.

Mr. Hancock said British health authorities had identified a new, faster-growing variant of the virus, which he said might explain why the number of cases is rising so quickly in the capital, as well as parts of south and east England.

But that sobering news did not prevent grumbling from some members of Mr. Johnson’s Conservative Party, who warned that the new restrictions would deal another blow to the beleaguered hospitality and retail industries. Some questioned the logic of imposing a lockdown now when the government plans to ease restrictions so families can reunite in the days around Christmas.

“We must end the devastating cycle of repeated restrictions and lockdowns, recapture the public’s support and confidence and start living in a sustainable way again,” said Mark Harper, who chairs the Covid Recovery Group, a caucus of Conservative lawmakers who have criticized the government’s tactics.

Mr. Hancock did not back off the promise of a Christmas break, but he urged people not to let up at a time when hospitals have begun administering doses of the Pfizer vaccine. “Until we can vaccinate enough vulnerable people,” he said, “and ensure they get the second dose of the vaccine, we must suppress the virus.”

Britain, Mr. Hancock said, had notified the World Health Organization of the new variant of the virus, which it detected last week. He said there was no evidence that it caused more severe illness than existing variants. And he said it was highly unlikely that it would be any more resistant to a vaccine, though he said the authorities were still conducting tests on that question.

Medical experts said the discovery of a new variant was not, by itself, all that surprising. The variant, which has been found in roughly 1,000 people after first being detected in Kent, in southern England, is similar to that in other countries. Experts said it served mainly to underscore the need for more robust border controls.

More baffling, they said, was the government’s on-again, off-again plan for dealing with the surge in cases. Under the new restrictions, pubs and restaurants in London will be closed, except for takeout service, while people from different households will be forbidden from socializing indoors. 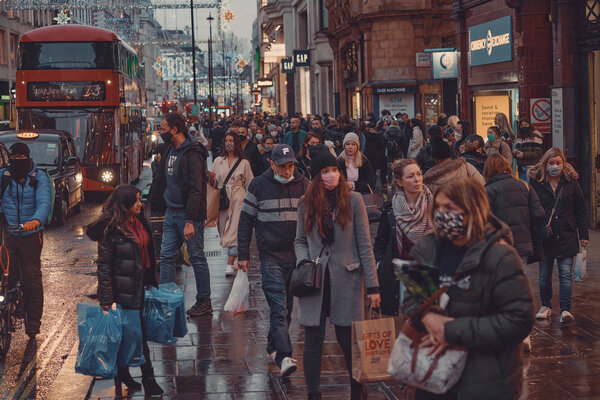 Yet under a previously announced plan, the government will temporarily lift the restrictions again a week later to allow up to three families to mix indoors. The break will begin Dec. 23 and last until Dec. 27 in most parts of Britain (people traveling to and from Northern Ireland can travel on Dec. 22 and 28). After that pause, London and the other affected regions would presumably go back under tighter restrictions.

“They should cancel Christmas mixing,” said Devi Sridhar, chair of the global public health program at the University of Edinburgh. She said lifting the restrictions would simply store up problems that would become chillingly apparent in January in the form of higher infection rates, hospital admissions and deaths.

Britain reverted to a tiered system of restrictions in early December after emerging from its second nationwide lockdown. The system, which imposes a patchwork of restrictions across the country, has never been popular, with local officials and businesspeople complaining that their regions were subject to unfair restrictions.

Until now, much of the animosity was between the major industrial cities of the north, like Manchester and Liverpool, which have been in Tier 3, the highest level, and London, where life remained close to normal. But now the capital has experienced what Mr. Hancock called a “sharp, exponential” rise in cases.

London’s outer boroughs have been particularly hard hit. In Enfield, in north London, infections rose 74 percent last week over the week before. In Harrow, they jumped 52 percent. In central London, the growth has been much slower, leading some to question why the entire metropolitan region is moving into the highest tier.

Britain is not the only European country dealing with another surge of the virus. Germany, Italy, Belgium, and France all announced tough new restrictions that will extend through the holiday period. Germany, like Britain, had planned to relax restrictions around Christmas; instead, it made them stricter.

Mr. Johnson left it to Mr. Hancock to announce the new restrictions. The prime minister faces another politically difficult decision in coming days on a post-Brexit trade agreement. On Monday, negotiators for Britain and the European Union resumed talks in Brussels, amid some tentative signs of progress.

If Mr. Johnson strikes a deal, he could face blowback from pro-Brexit lawmakers in his party, who view the negotiations as an assertion of British sovereignty. That would add to an unrelenting wave of pressure that the prime minister has faced as he has balanced public health and economic priorities throughout the pandemic.

Mr. Johnson won support from London’s mayor, Sadiq Khan. But Mr. Khan called on the government to consider closing some schools for pupils aged 10 to 19 early, and to reopen them later than planned in January. He also demanded more financial compensation for businesses affected and more aid for those required to self-isolate.

But Conservative lawmakers were less supportive. Iain Duncan Smith, a former leader of the Conservative Party, said the decision would “hammer down” on pubs and restaurants, which have social distancing controls, and might embolden people to socialize in their homes under less secure conditions.

Another Conservative lawmaker, Bob Neill said the measures would have a “crippling effect” on hospitality. His colleague, Felicity Buchan, asked why the capital could not be divided into different regions to protect business in central London, which she called “the powerhouse of our national economy.”

The hospitality trade, not surprisingly, reacted with fury, arguing that the spread of cases was being predominantly driven by infections in schools and that forced closings would devastate businesses that had invested heavily to make themselves safe for socially distanced gatherings.

“There is no getting away from the fact that moving London and other areas into Tier 3 the week before Christmas will further cripple the pub sector, which is already on its knees and impact on the livelihoods of our team members and tenants,” Nick Mackenzie, chief executive officer at Greene King, a large pub and brewing chain, said.