Anwar Raslan says he ‘neither beat nor tortured’ prisoners at the Al-Khatib detention centre in Damascus. 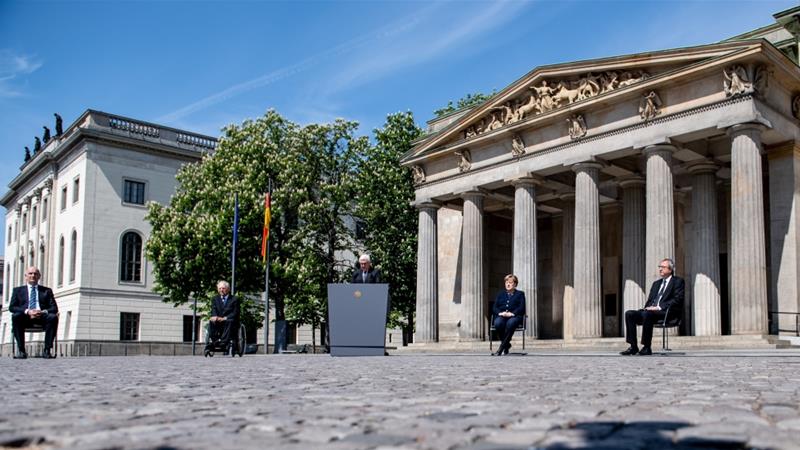 A former Syrian intelligence officer has denied that he was involved in beating and torturing detainees in prison as he faced trial in a German court for crimes against humanity.

In a written statement, read by his lawyers on Monday, Anwar Raslan, 57, said he had “neither beaten nor tortured” prisoners at the Al-Khatib detention centre in Damascus, where he is charged with overseeing the murder of 58 people and the torture of 4,000 others.

Sitting behind a plexiglass screen because of the coronavirus pandemic, Raslan appeared deep in concentration as his lawyers Michael Boecker and Yorck Fratzky took about 90 minutes to read his statement.

Rather than torturing prisoners, Raslan said, he had “helped to free” many detainees arrested in the uprising against Syrian President Bashar al-Assad from March 2011.

The trial in Koblenz, which began on April 23, is the first court case worldwide over state-sponsored torture by the al-Assad government.

His co-defendant, 43-year-old Eyad al-Gharib, is accused of being part of a police squad that detained protesters and brought them back to Branch 251, where they were then mistreated.

Raslan and Gharib are being tried on the principle of universal jurisdiction, which allows a foreign country to prosecute crimes against humanity.

As he entered the court, wearing glasses and a dark jacket and sweater, Raslan greeted his two lawyers with a smile and a hand over his heart, a common greeting in the Middle East.

It is the first time he has spoken publicly about the crimes he is charged with, allegedly committed at the prison between April 29, 2011, and September 7, 2012.

At the opening of the trial, prosecutors said Raslan had overseen rape and sexual abuse, “electric shocks”, beatings with “fists, wires and whips” and “sleep deprivation” at the prison.

Referring to accusations made by witnesses, he repeatedly denied any responsibility, particularly in the case of an alleged rape. “It is against our morals, against our religion,” he said.

“I distance myself from such acts if they have been committed,” he added.

Raslan worked for 18 years in the Syrian intelligence services, where he rose through the ranks to become head of the domestic intelligence “investigation” service, according to a German investigator who testified on the second day of the trial.

Raslan defected and fled Syria at the end of 2012 before arriving in Germany in July 2014 under a programme for Syrian refugees in need of special protection.

The trial could last up to two years, according to observers, with the victims due to begin testifying in July.

Wolfgang Kaleck, secretary-general of the German NGO European Center for Constitutional and Human Rights, which is supporting 17 victims in the proceedings, said Raslan had issued, not merely received and followed, orders in his department.

“We do not believe he played a minor role,” Kaleck said.

According to the UK-based Syrian Observatory for Human Rights monitoring group, at least 60,000 people have been killed under torture or as a result of the terrible conditions in al-Assad’s detention centres.