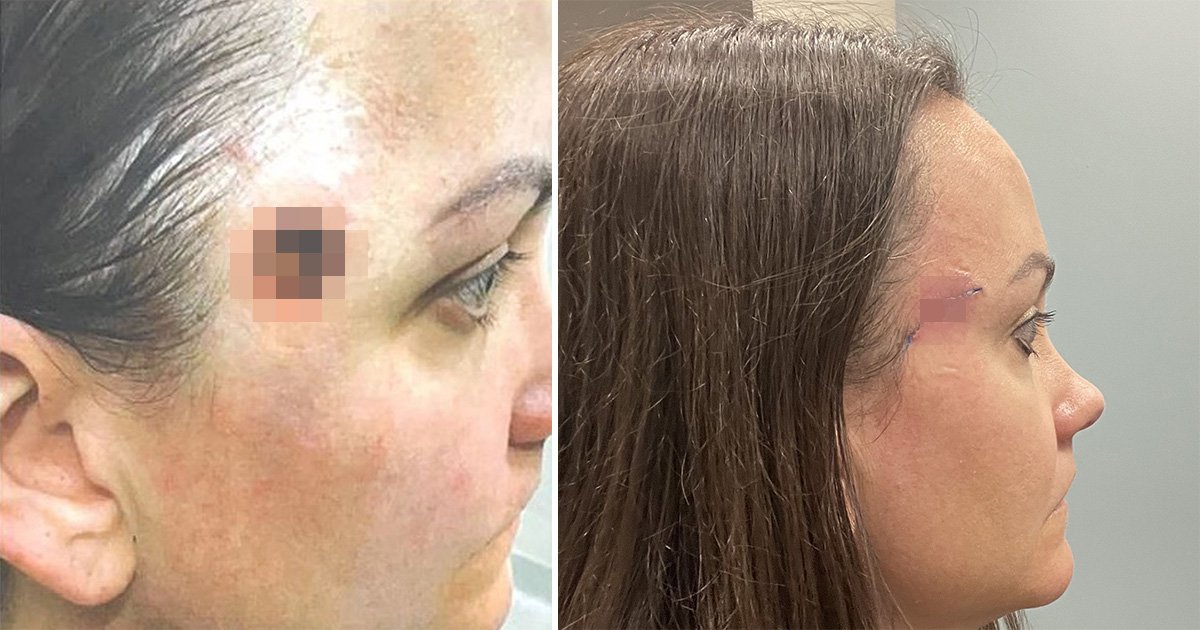 A woman was left with a ‘golf ball-sized’ hole in her face after her love of suntanning led to her getting skin cancer.

Misty Ovens, 44, used to regularly go on sunbeds to top up her tan, doing this on average once a week for ten years during her youth.

Doctors realised what was wrong after the mum-of-three went to them with a mark on her temple, which wouldn’t heal after she snagged it.

It first appeared in December 2021, but Misty thought nothing of it at first until she accidentally caught it.

She had to have surgery to remove the cancer, leaving a large red hole on her face that was stitched up ‘like Frankenstein’.

Soon after the op she received the good news that the margins around the cancer site were clear.

Misty is now keen to raise awareness of the importance of wearing and reapplying sunscreen.

‘The hole was the circumference of a golf ball but wasn’t as deep as one.

‘I was really shocked when I saw the size of the hole and the stitching.

‘I think that was the first time that I started actually processing any feelings about it. I kind of just shut it out when I went into it.

‘My husband and friends are very kind and tell me it’s not that bad, it’s always more intense when it’s on your face.’

The child protective services supervisor added: ‘In the last six months I noticed that the bump at the side of my face kept getting bigger.

‘I had these little bumps on my skin for the last ten years so I just thought it was another one of those.

‘When I go in for my monthly facials usually they can take care of them and they couldn’t with this one.

‘It started having a secondary bump coming out of it down below, almost like a tail.

‘It just kept getting bigger and then one day when I was cleaning my glasses my fingernail snagged it and it started bleeding and I just figured it would close up but it never did.

‘It got a little more conspicuous and when I went into my facial the next month I asked a dermatologist to come and look at it and she said that I needed to get it checked out.’

After waiting around six weeks to be referred to a dermatologist, Misty was told that they were 90% sure it was cancerous.

A biopsy at the end of March confirmed their suspicions and she tested positive for basal cell carcinoma.

She then had a Mohs procedure – a precise surgical technique used to treat skin cancer – to remove the bump.

Within 30 minutes of having the bump whipped of it was confirmed that the margins were clear, so they stitched the wound up.

Misty said: ‘I honestly thought that I was just going in to get it frozen off because I had friends who had similar experiences.

‘When they showed me the hole that was in my face I was really shocked. It was a lot more of a traumatic surgery than I thought it was going to be.

‘I went through breast cancer when I was 34 and had a double mastectomy and went through chemotherapy, which was really traumatic for me and my family.

‘When I found out it was cancer [skin] it was kind of surreal.

‘They said it was the ‘best’ kind of skin cancer you can get so I was fairly confident I wouldn’t have to go through chemo again or anything like that.

‘But the worst-case scenario comes into your mind.

‘Serving as a board member of our cancer centre, I’m exposed to a lot of worst-case scenarios and skin cancer can be pretty deadly, so that was always in the back of my mind.

‘But I was confident that I’d caught it early enough so I was just bracing myself for the worst and hoping for the best, which is the attitude I try to take on these things.’

Misty is now healing from her surgery and said she shouldn’t need any further treatment.

She said: ‘Growing up I played soccer, we were big sunbathers and used tanning beds in high school before a dance.

‘We would lay out in the sun with oil on, all that nonsense, which clearly as I got older realised was wrong.

‘I have five different friends now who have reached out to me and told me that they’ve scheduled skin checks with a dermatologist.

‘I’m a missionary for sunscreen now and making sure people reapply.’