The return of the skulls of 24 resistance fighters comes amid a growing global reckoning with the legacy of colonialism. 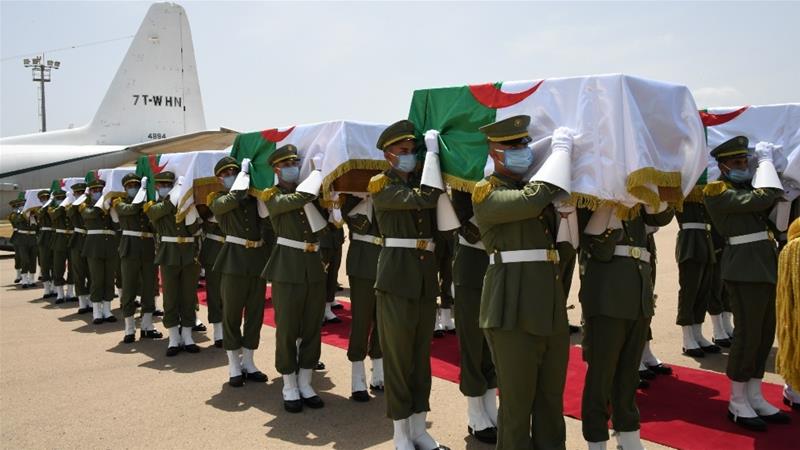 Algeria has received the skulls of 24 resistance fighters decapitated during France’s colonial occupation of the North African country, and which had been stored for decades in a Paris museum.

The return of the skulls was the result of years of efforts by Algerian historians and comes amid a growing global reckoning with the legacy of colonialism.

“The valiant resistance fighters who refused the colonisation of their country by imperial France were displayed immorally for decades, like vulgar objects of antiquity, without respect for their dignity, their memory. That is the monstrous face of colonisation,” Algerian army chief Said Chengiha said in a speech on Friday.

“Algeria is living a special day today,” he said.

The 24 fought French colonial forces who occupied Algeria in 1830 and took part in an 1849 revolt. After they were decapitated, their skulls were taken to France as trophies.

In 2011, Algerian historian and researcher Ali Farid Belkadi discovered the skulls at the Museum of Man in Paris, across from the Eiffel Tower, and alerted Algerian authorities.

The researcher lobbied for years for their return, and Algeria’s then-President Abdelaziz Bouteflika eventually launched the formal repatriation request.

In December 2019, Macron said “colonialism was a grave mistake” and called for turning the page on the past.

The remains will be on public display at the Palace of Culture in the capital on Saturday, and will then be buried in a special funeral east of Algiers on Sunday – the 58th anniversary of Algeria’s independence from France after a long and bloody war.

In tears, Algerian President Abdelmadjid Tebboune presided over Friday’s ceremony, alongside the heads of both houses of Parliament and top military officials.

The skulls were placed in coffins wrapped in the Algerian flag, and carried by soldiers across the tarmac as a military band played.

Among the remains were those of revolt leader Sheikh Bouzian, who was captured in 1849 by the French, shot and decapitated, and the skull of resistance leader Mohammed Lamjad ben Abdelmalek, also known as Cherif Boubaghla (the man with the mule).

Historians welcomed the return of the remains, but say they are just part of Algeria’s history that is still in French hands.

“But the fight must continue, until the recovery of all the remains of the resistance fighters, which number in the hundreds, and the archives of our revolution.”