PARIS — Two teenagers were paid about $350 to identify a teacher who was later decapitated outside the suburban school where he worked, a prosecutor said Wednesday, as officials continued to investigate a killing that has set off a wave of national mourning, tributes to the teacher, and a broad government crackdown against Muslim individuals and groups.

The national homage continued Wednesday as President Emmanuel Macron eulogized the slain teacher, Samuel Paty, calling him a “quiet hero,” in a solemn evening ceremony at the Sorbonne in Paris. Mr. Paty, who was killed Friday, was also awarded France’s highest civilian honor, the Legion d’Honneur.

The special antiterrorism prosecutor, Jean-François Ricard, unveiled the new findings in the inquiry on Wednesday as part of a probe into what he termed a “terrorist murder conspiracy.”

That designation suggests officials are attempting to cast a broad net and don’t view the suspect, Abdoullakh Anzorov, an 18-year-old Chechen immigrant, as merely a lone-wolf killer, an approach that dovetails with the government’s view of the killing as a menacing surge of militant Islamism.

That, in their view, has justified dozens of raids all over France, the closure of a prominent mosque, the shutting down of Muslim aid organizations and the mass expulsion of foreigners identified in government antiterrorism files.

The right and the anti-immigrant far right have been pushing for even stiffer measures, and Mr. Macron is facing a tough re-election in 2022. Mr. Macron’s prime minister, Jean Castex, was forced to get up in Parliament several times on Tuesday to assert the government’s toughness in facing down Islamists, even as representatives on the right booed him.

The teenagers, students at the school, are among seven people being investigated in connection with the killing of Mr. Paty. They include two young men who were friends of the Mr. Anzorov, whom officials said helped him buy the knife and drove him to the school outside Paris. Mr. Anzorov was shot and killed by the police shortly after the attack.

The teacher was targeted for having shown caricatures of the Prophet Muhammad published by the satirical magazine Charlie Hebdo, the same images at the origin of the massacre on the magazine’s premises in 2015. 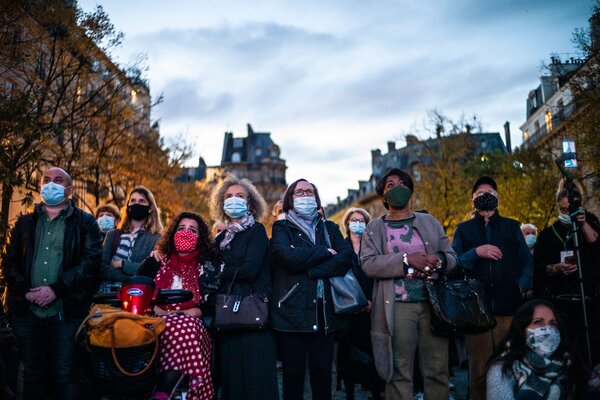 Mr. Anzorov hung around the school Friday afternoon, enlisting students to help him identify Mr. Paty. He told the students he wanted to confront the teacher to “force an apology for having used the caricatures of the prophet, to humiliate him, to beat him,” Mr. Ricard said. These students tried to hide from surveillance cameras and a police car, he said.

Shortly before 5 p.m., several students, including the two who had been paid, pointed out Mr. Paty as he emerged from the middle school, College du Bois d’Aulne in the Paris suburb of Conflans-Sainte-Honorine, Mr. Ricard said. Mr. Anzorov followed him and killed him in the street, posting a picture of his severed head online, officials say.

Another man being questioned, identified by the government as Brahim C., was said to be the parent of a student at the school. He had posted a video and vehement online objections to Mr. Paty’s use of the caricatures, and was contacted by Mr. Anzorov after the posting, Mr. Ricard said.

Also being investigated is a man described by the French security services as an anti-Semitic militant, Abdelhakim Sefrioui, who, in Mr. Ricard’s telling, had egged on Brahim C. Mr. Sefrioui made a video in front of the school before the killing in which he called Mr. Paty a “thug teacher” who had been called on by President Macron to “hate, fight, and stigmatize Muslims.”

There is a “direct line of causality between their actions and the death of Samuel Paty,” Mr. Ricard said. “It’s clear that the teacher was singled out by name as a target on the social networks by these two men, through their maneuvers, and their reinterpretation of the facts.”

Mr. Paty’s killing, the prosecutor said, took place “in a context of appeals to murder” which were in the air after the republication of the caricatures during the trial of Charlie Hebdo suspects that began in September. He noted that media organs linked to the terrorist network Al Qaeda had recently called for the “murder” of those who disseminated the Charlie Hebdo caricatures.

On Tuesday, the French government shut down a large mosque in Pantin, north of Paris, for having shared Brahim C.’s video. That day, parliamentary deputies in the National Assembly stood on the building’s portico steps in a silent tribute, and marches and demonstrations were held throughout France.

At the Sorbonne ceremony Wednesday, Mr. Paty’s coffin was carried by uniformed guards across the courtyard of the ancient university in front of dozens of invited officials. Several colleagues paid tribute to him.

Mr. Macron said that Mr. Paty was “killed because he incarnated the republic, which is reborn every day, in every class. He was killed because the Islamists want our future and they know that with quiet heroes like him they will never have it.”

A day earlier, Mr. Macron made an appearance in a troubled suburb of Paris, Seine-Saint-Denis, to declare that “you’ve seen, in the last few days, dozens of concrete actions launched against groups, individuals, whose project is radical Islam.” The raids Monday resulted in a single arrest.

Incidents here and there pointed to an increase in tension between France and its large Muslim community.

Interior Minister Gérald Darmanin, who has been the public face of the government’s crackdown and is seen as a far-right hard-liner, said on television this week that he was “shocked” when he went into supermarkets saw what he called “communitarian,” or Muslim-oriented, food products.

On Tuesday, the Paris police arrested two women on charges of attacking two other women near the Eiffel Tower Sunday night, yelling racial slurs and telling them “go back home” and “this is not your home,” according to a complaint filed by the lawyer of the women who were attacked.

One of the women was seriously wounded in the attack, suffering a perforated lung.