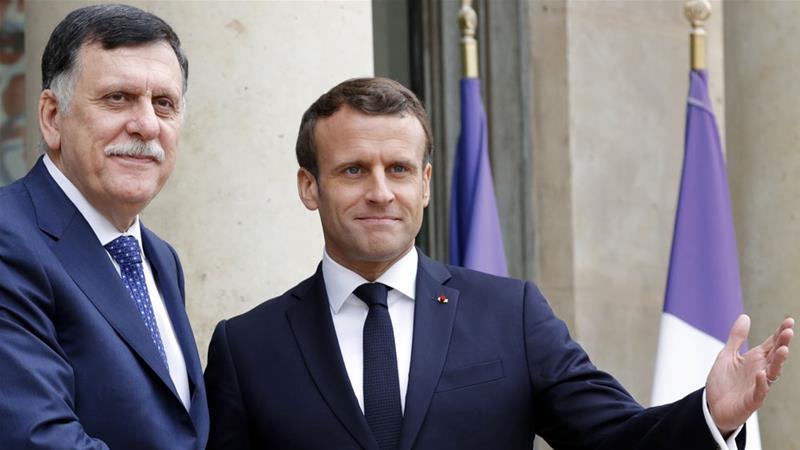 French President Emmanuel Macron has called for a ceasefire in the month-long battle for Libya’s capital Tripoli after meeting with Fayez al-Sarraj, the prime minister of the country’s internationally recognised government.

“Noting that there is no military solution to the Libyan conflict … the proposal was put forward to delimit a ceasefire line, under international supervision,” Macron’s office said in a statement on Wednesday, backing a UN peace plan and elections.

“The two leaders agreed on the importance of extending and deepening the dialogue with all stakeholders in Libya, including in the east, south and west of the country, and with civil society,” the statement added.

France has said it views eastern-based military commander Khalifa Haftar, who mounted the Tripoli offensive on April 4 under the banner of combatting “terrorism”, as a key player in rebuilding Libya after years of strife.

It did not specify where any ceasefire line might be drawn, now that Haftar’s forces have reached the southern outskirts of the capital.

Haftar and his self-styled Libyan National Army (LNA) have struggled to maintain momentum in the advance, faced with a counteroffensive by troops aligned with Serraj’s Government of National Accord (GNA).

The fighting has killed at least 433 people and wounded 2,110 while displacing more than 55,000 others, the World Health Organization (WHO) said on Wednesday.

Hopes for a halt in the fighting to mark the onset of the Muslim holy month of Ramadan were dashed this week after Haftar urged his troops to inflict “an even harder” lesson on forces loyal to the internationally recognised government.

And the GNA has previously rejected any ceasefire unless Haftar pulls his troops back to the areas they held before the April 4, in the south and east of the country.

Overnight Tuesday, there was shelling on a camp of pro-Serraj fighters, witnesses said. Shrapnel struck the roof of a nearby migrants’ detention centre in the eastern suburb of Tajoura.

Though nobody was wounded at the centre, frightened migrants, who had come mainly from sub-Saharan African nations hoping to reach Europe by sea, pleaded for rescue.

“We have almost lost hope in our life,” one migrant at the centre told Reuters News Agency, declining to give his name. “War here is too much. Please, we need help.”