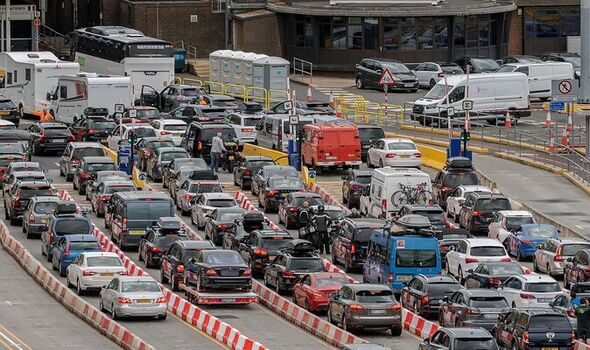 Frantic Friday will see millions of families setting off on their breaks as schools close for six weeks. Travellers were warned to prepare for slow progress, with air and road travel expected to be severely affected. And families on Thursday were already starting to be caught up in long ferry queues at the Port of Dover.

RAC spokesman Rod Dennis said: “We expect the summer getaway to begin with a bang as a potentially record-breaking number of drivers take to the roads this coming weekend.

“With school terms in England and Wales finishing this week and millions of people ready for a well-earned break, we anticipate a frantic Friday, followed by a woeful weekend on major roads across the country, with traffic and congestion likely peaking on Saturday.

“The advice to drivers heading off on a holiday by car is therefore clear – leave as early as you can in the morning or expect to be sat in some lengthy queues.”

Travel firms and airports have drafted in hundreds of extra staff, but have called on passengers to be ready for possible delays, air cancellations, queues at airports and heavy congestion on the roads.

The rail network and ferry operators said they also expected bumper weekends and called on travellers to show patience.

With staycations hugely popular in the wake of the pandemic, and with the ongoing glorious weather, the roads in particular are set to be busier than ever before.

The RAC warned that the M25, A303, M4 and M5 could see some of the worst queues as families dash for the South-west.

On Friday and Sunday are not expected to be not far behind with 4.3million separate trips on each day. In total, an estimated extra 5.61m journeys by car will take place between ‘frantic Friday’ 22 July and the end of Sunday by drivers currently unsure as to which day they will get away.

Ferry operators warned passengers to expect delays of several hours at the border in the coming days.

“Our check-in is free-flowing and all sailings are on time.”

With respect to air travel, just under million holidaymakers are booked to jet off this weekend aboard 5,076 flights scheduled to depart from UK airports.

Thousands more are still scrambling to get flights after the wave of cancellations in recent weeks, mainly because of staff shortages.

But operators such as TUI and EasyJet said they were upbeat that they would be able to cope with the weekend’s demand.

EasyJet said it had recruited 350 new customer service staff and is opening a new call centre in Milan to help ease any delays.

The airline will also be stationing head office staff in UK airports to provide additional support to passengers, and has introduced new interactive signage in airports. 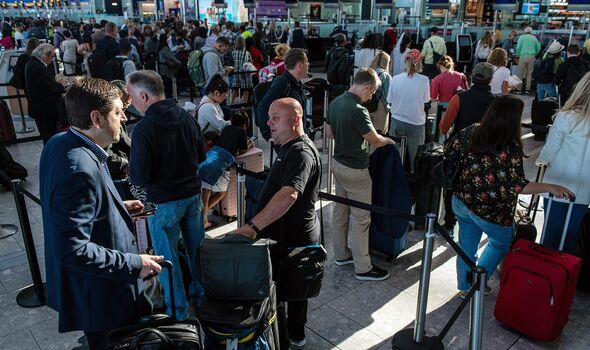 It will further allow customers travelling on early-morning flights to drop hold baggage off the evening before they travel.

TUI, the UK’s largest tour operator, said it had also recruited hundreds more staff to work in airports, contact centres and its operations hub to provide extra support to customers.

Emergency travel options include five aircraft on standby to be used if a plane becomes unavailable because of technical issues.

It has even further strengthened relationships with partners, UK airports and destination airports to minimise any disruption and delays and offering day before bag drop at its busiest airports, including Gatwick, Birmingham, Bristol and Manchester to speed up the check in process.

Andrew Flintham, TUI managing director, said: “As the UK’s number one holiday company we want our customers to know they can trust in TUI this summer.”

Graeme Buck, Director of Communications at ABTA – The Travel Association said: “Holidaymakers can help keep queues to a minimum by arriving at the airport at the time advised by their airline, having their travel documents ready for check-in and carefully preparing their hand luggage for security.”

Airports on Thursday were gearing up for the busiest weekend of the year.

Bosses said more staff were also being recruited in a move aimed at reducing pressure on the airport as it goes into the busy school summer holiday period.

Gatwick said it was also trying to increase awareness about placing liquids in a clear bag, separate from hand luggage, to reduce delays at security.

Chief operating officer Adrian Witherow said: “With passenger numbers rapidly returning to 2019 levels, we expect to be busy, particularly at peak times such as weekends and the forthcoming school summer holidays.

“We are doing everything possible to make the airport process as smooth as possible, including recruiting and training hundreds of new security staff, many of whom have already started or will be in coming weeks.

“It’s also important, however, that we do what we can to help passengers prepare for security before reaching the trays.”

Air travel has been in crisis of late, with thousands of flights cancelled and many passengers forced to wait for several hours in long queues at airports.

Many passengers flying to and from the Heathrow have suffered severe disruption in recent months, with long security queues and baggage system breakdowns.

Staffing for ground handling teams at Heathrow are only at 70per cent of pre-pandemic levels, whereas passenger numbers are at 80per cent-85per cent.