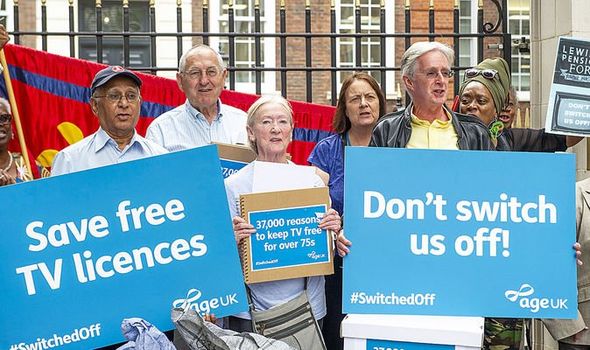 Almost 90,000 people have sent emails protesting the move to the BBC and Government in a campaign organised by Age UK. Prime Minister Boris Johnson has found his social media and Twitter feed besieged by tens of thousands of messages from 1½ million National Pensioners Convention (NPC) members. Protests And thousands of elderly intend to pay for their licences by cheque in a “gum up the works” revolt organised by the older people group, Silver Voice.

Only elderly people who claim pension credit will qualify for a free licence.

Around 900,000 pensioners aged 75-plus claim the support but if everyone claimed it who was entitled, the figure would rise to 1½ million.

Action against the axing of the benefit is set to continue right up to the last minute, with a week of socially distanced public protests across the country.

Jan Shortt, the general secretary of the NPC, said: “The free TV licence for all over-75s is a universal entitlement which provides a window on the world for so many older people who, particularly at the moment, rely on it for information and company.

“The Prime Minister, who promised last November that it was ‘crucial’ to save the free licence for all over-75s, has failed to keep his promise.

“To impose means-testing on them to determine if they should receive the free licence is simply wrong, particularly in a wealthy country like ours.

“That’s why the healthiest and fittest of our older members are planning to don masks and gloves to join a static and socially distanced demonstration outside Downing Street.

“Where possible, members will also protest outside BBC offices. We also want members of the public to let the PM know how angry people are, by tweeting and posting pictures and videos on his social media in a last-minute bid to stop this miscarriage of justice.”