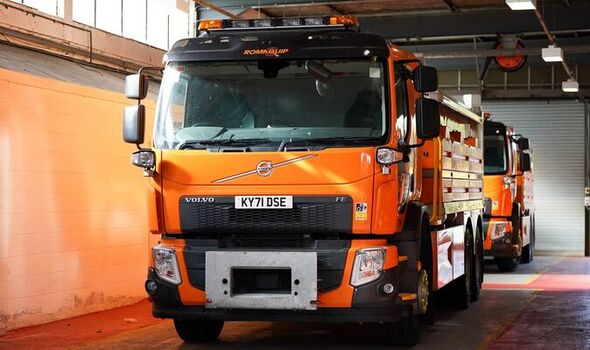 A £44million fleet of faster, cleaner, high-tech gritters has been assembled for our icy motorways and major A roads. National Highways said the 252 vehicles can travel at up to 50mph when spreading.

That is 10mph quicker than earlier models, reducing delays for other road users.

The gritters meet the latest emissions standards for diesel vehicles, known as Euro 6.

They are also fitted with technology which means drivers receive the latest information on where and when to salt and can select the most appropriate treatment for different road conditions. Around 144 of the new Volvo Romaquip gritters were deployed last winter, with the remaining 108 joining them in recent months.

“These vehicles are environmentally friendly and can be driven at higher speeds.”

National Highways has stockpiled around 280,000 tons of salt for the winter months, with “salt mountains” at 128 depots. Between October 1 and early April each year, it receives detailed weather forecasts from three providers and monitors conditions.

When there is a risk of frost, ice or snow it sends gritters out to spread salt. The trucks can also be fitted with snow ploughs.

He said: “We are finding we might have a mild winter, but equally we might have a winter that is the third worst in the past 10 years in terms of salt usage or the number of times we’ve been out.

“We have to be prepared for both extremes.”