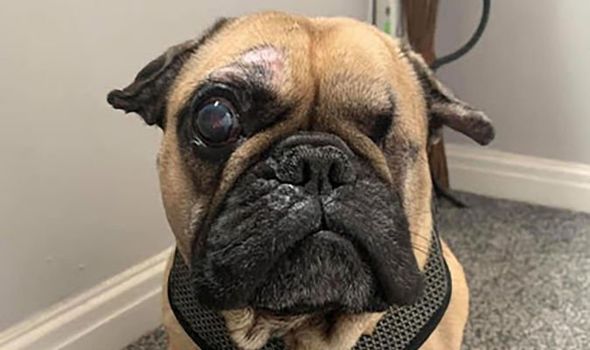 Yogi Peanut arrived at Friends of Animals Wales rescue so shut down that vets and carers believed he could have been brain damaged from the abuse he had suffered. The four-year-old dog had been ‘battered around the head’ before vets confiscated the animal following concerns for his welfare.

The Frenchie had already lost an eye in an emergency operation, but it became clear that he would need his other removing soon ‑ leaving him tragically totally blind.

The frightened dog was quickly taken into foster care by dog walker and boarder, Emma Caskie, who helped him regain his confidence.

The 40-year-old, from Crewe, said: “He was severely abused and there is no justification whatsoever.

“Yogi has no eardrums left due to chronic infections left untreated and both his ear flaps have had injuries which have left serious scarring and hematomas that will leave his ears permanently flat, and has got spinal damage which could leave him paralysed in the future.

“For someone to have mistreated him in the way they have is just horrific.”

When he was rescued in June 2020, Yogi would scream at being touched, with vets wondering if his injuries had left him with brain damage.

Emma, who owns Hound Club Dog Walking and Pet Services, said: “We would put him in one spot and he would just stay there. He wouldn’t move and you’d have to pick him up and move him around.

“Yet, slowly but surely he started to show signs that he could hear a tiny amount and that he was learning to trust me.

“I can’t really say he’s blossomed, he’s a very sensitive dog but he definitely responded to me and got excited when I came home ‑ and then fell over because his back legs couldn’t support him properly. But you could really see personality had started to come through.”

After Yogi had his other eye removed, he and Emma developed an amazing bond and way of communicating through a series of high pitched sounds and clicking.

And after a few months of rehabilitation, Emma decided Yogi had already found his forever home.

She said: “I’ve fostered blind and disabled dogs before and they’ve gone off to amazing homes. But with Yogi, he chose to stay with me.

“I think because he came to be with one eye and limited vision, he’s managed to navigate around my house now, so when he lost his second eye, he was used to my voice and he knew the particular clicks of my fingers.

“When he stopped flinching when I touched him, I knew he recognised my smell and became really settled in my environment.

“I thought, if I uproot him again it’s going to cause him so much stress because of his limited senses. I didn’t want to put him through any more trauma and he’s been through enough.”

Yogi now lives with Emma and her French bulldog, Milo, Bengal cat, Meatloaf, and two foster dogs, a Shar Pei called Wrinkles and a Frenchie called Dennis ‑ who are both looking for homes.

“You always know the goal is to find the best home for them. It’s really hard to keep them because you know it’s a space that another foster could potentially need, but I think Yogi needs that space so he’ll stay with me for as long as he’s enjoying his life.

“He gets a lot of comfort from the other dogs that come into foster and uses them as a pillow. “He’s part of the pack now and is just a real gentle soul.”

Yogi was nominated for a Naturo Superdog award last month in the ‘Survivor’ category, and this month, is up for Rescue Pet of the Year for Animal Star.

He even met TV presenter Clare Balding at DogFest North in September, who was ‘horrified’ at what the little pup had been through.

Emma has been volunteering for rescues since she was 13 years old, and has fostered nearly 150 dogs in her own home.