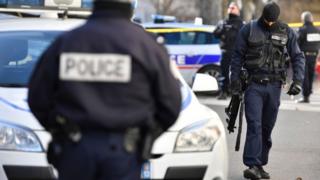 An armed gang has freed a prisoner from a police van in southern France.

The accomplices knocked a female guard to the ground and shot at the van in the town of Tarascon.

The prisoner was being transferred from Beziers prison, 150km (90 miles) to the west. He was due to appear before judge on charges of armed robbery.

This is the second dramatic escape by a prisoner in less than a year in France. Last July gangster Rédoine Faïd broke out of prison in a hijacked helicopter.

He was captured in Paris three months later.

The attack in Beziers happened at about 08:30 on Monday.

The guards had left the van to ring the doorbell to the courthouse when the gang struck, prison guard representative Nicolas Burtz told AFP news agency.

The female prison guard refused to let the prisoner go and was knocked to the ground. No-one was injured in the shooting.

According to Karim Terki, a union representative, the unnamed detainee had tried to escape prison before.

“The authorities are really naive. He played nice for several months in order to try to escape again,” Mr Terki said.