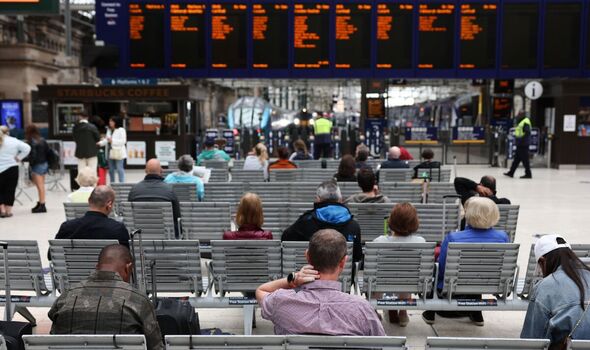 Union members will begin a fresh wave of “unnecessary and damaging disruption” on Tuesday when workers return to work after the festive season.

Members of the Rail, Maritime and Transport union (RMT) at Network Rail and 14 train operators will stage two 48-hour walkouts from Tuesday and Friday, while drivers in the Aslef union will strike on Thursday.

Steve Montgomery, chair of the Rail Delivery Group, said “sadly” there will be more strikes the week people return to work after the festive season.

He added: “I can only apologise to passengers and to the many businesses who will be hit by this unnecessary and damaging disruption.

“It is vital we encourage people back to the railway who have developed a fondness for home-working and virtual meetings, and the current situation of last-minute cancellations and delays will only cause more people back into their cars.

“Our passengers and our people need these strikes to end.”

Pubs and restaurants will lose an estimated £2.5 billion in lost takings because of the rail walkouts, business chiefs said.

Kate Nicholls, of UK Hospitality said: “Hospitality is facing a New Year hangover as rail strikes delay the return to work and make our town and city centres ghost towns for yet another week.

“This piles further misery on commuters and tourists.

“We cannot go into another year losing £2.5 billion in sales. Enough is enough, this needs to end now.”

Trains that do run during walkouts this week will start later and finish much earlier than usual, with services typically running between 7.30am and 6.30pm on the day of the strike.

The train drivers strike on Thursday will affect 15 operators and will result in even fewer services running, with some companies operating “very significantly reduced” timetables.

Aslef general secretary Mick Whelan said the union is “in it for the long haul”, adding: “We don’t want to go on strike but the companies have pushed us into this place.

“The train companies say their hands have been tied by the Government.

“While the Government – which does not employ us – says it’s up to the companies to negotiate with us.

“We are always happy to negotiate – we never refuse to sit down at the table and talk – but these companies have offered us nothing, and that is unacceptable.”

Mick Lynch, general secretary of the RMT, has accused the Government of blocking a deal to end the waves of disruption.

He says he is willing to negotiate, but is calling for an offer on pay, jobs and conditions his members can vote on.

Sources last week said Mr Lynch had taken a “less muscular tone” during meetings in the run-up to Christmas.

Another Government insider said ongoing action is an “act of real self harm for” unions themselves, with growing discontent among senior union ranks.

They added: “Even in senior echelons of unions there’s a lot of disagreement on where they should go next. The members are pretty unhappy about the level of losses that they are sustaining.

“They can’t sustain long-term action without inflicting real damage on their own people as well.”

Meanwhile, National Highways urged drivers to plan ahead for journeys in the new year amid another strike by some of its workers when traffic levels return to normal after the Christmas break.

Members of the Public and Commercial Services union (PCS) are planning a national walkout on Tuesday and Wednesday – the first working days after the holiday season in England.

Duncan Smith, executive director of operations at National Highways, said: “Millions of people rely on our roads and there is a possibility that they may be busier than usual on strike days, particularly as they fall on the first working days after the festive break when industrial action is also being staged on other transport modes.”

Mark Serwotka, general secretary of the PCS, warned ministers that “coordinated and synchronised” strike action across the economy will “significantly escalate” from January.

The Department for Transport said: “Passengers have rightly had enough of rail strikes and want the disruption to end.

“The Government has demonstrated it is being reasonable and stands ready to facilitate a resolution to rail disputes. It’s time the unions came to the table and played their part as well.

“Inflation-matching pay increases for all public sector workers would cost everyone more in the long-term – worsening debt, fuelling inflation, and costing every household an extra £1,000.

“Unions should step back from this strike action so we can start 2023 by ending this damaging dispute.”