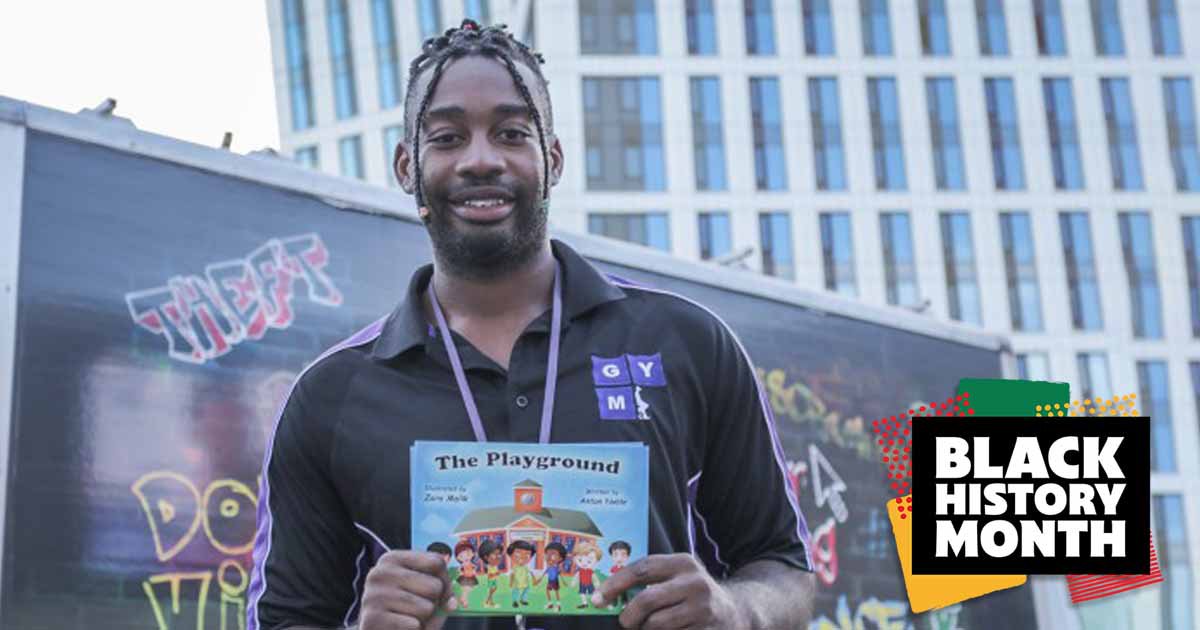 A youth leader who escaped a life of crime is going back to the playground to stop young lives being lost to gangs and drugs.

Anton Noble believes that one of the intervention points on a road ultimately leading to prison is the schoolyard, and he has channelled his life experiences into a preventative book suitable for young readers.

The reformed character wants to stop the ‘gang mentality’ from creeping in at an early age as children establish pecking orders and learn to socialise.

Some of those he works with are considered to have exhausted every last chance before prison.

The mentor now wants to steer primary school children in the right direction, long before they need his help.

‘I wrote the book because I felt teachers and kids need to know that the playground is one of the biggest areas where kids learn while they are at school,’ he says.

‘Classrooms might be where they are taught, but playgrounds are where you learn how to be sociable and to control your emotions.

‘When I was younger the playground was the place where gang behaviour started, it was about who was the hardest and most popular, or who had the highest rankings. My book shows teachers, families and children that we can all learn from each other in the playground as much as in the classroom.

‘Primary school needs to be the starting point for breaking gang culture before it goes on to secondary school, the outside world and prison.

‘If some of us had learned these lessons at the time we wouldn’t be where we are now. My life would definitely have been different if I had taken this on board, I wouldn’t have fallen into gangs and crime.

‘I’ve learnt that the gang mentality comes from ignorance and there’s no reason why we can’t learn from each other.

‘I want to encourage children to stop comparing themselves with each other as they are all masterpieces and unique.’

As a teenager with few positive role models, Anton swapped a broken home in Coventry, where he still lives, for an adopted street family.

Life changed after his brother’s near-death from a drugs overdose and he became an outreach worker, speaking to at-risk young people on the streets as well as those already involved in crime.

Also inspired by finding God and the church, he put ‘the roads’ behind him and has since set up the Guiding Young Minds (GYM) intervention team, which is part of the Assist Trauma Care charity.

Speaking, and sometimes rapping and DJ-ing, in schools, public places and on social media, Anton has helped more than 1,000 young people escape similar pitfalls to date.

Working across the West Midlands, London, Milton Keynes and Northampton, he has a graffiti-emblazoned minibus with a meeting space which he parks up in inner-city areas, often staying after dark with other youth workers who have also escaped gangs and crime.

Speaking to Metro.co.uk for Black History Month, the 31-year-old said he wants to use the legacy of his Windrush-era grandparents to inspire harmony between cultures.

They were among a generation of Jamaicans to fill vacancies after the Second World War, bearing racism with dignity as they established new lives. Anton’s grandparents on both sides left a legacy that he wants to continue today. It is one of love, not bitterness, he tells Metro.co.uk

‘One of the reasons I put myself in the story is because I didn’t grow up to see many people who looked like me in school books,’ Anton says.

‘Black History Month is a great time to spread this awareness and send out positive messages to young people, but I want to also show how all cultures can learn from each other.

‘We need to learn about the past but not to divide people and pass on hate, we need to look forward and bring people together.

‘My grandparents came over here with just their suitcases and made their lives in a new country, there were certain things that happened and a lot of racism, they didn’t get certain jobs even though they had the skills, but they fought through it.

‘If it wasn’t for their resilience we wouldn’t be where we are today.

‘That’s what needs to be passed down the generations.

‘Even though it’s Black History Month, the message should be everyone is welcome to share our culture.’

Anton will be sharing some of his life lessons in person when he uses his debut book for workshops at primary schools covering topics including emotional intelligence and how gangs are formed.

Illustrated by Zara Malik, The Playground is a diverse and multicultural resource that schools and families can use to engage with young people.

The book encourages healthy dialogue around subjects such as rejection, not fitting in, bullying and negative role models.

For more information about Anton and GYM click here