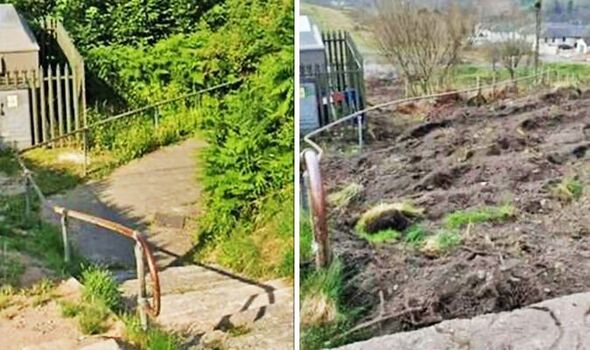 Christopher Rees covered the concrete steps with soil in “a complete fit of temper” after his neighbours became angry with his lorries and heavy machinery operating on the site of his recycling firm “at all hours of the day and night.” The route was an integral link between tight-knit hillside community Stormtown, south Wales, and the village of Trelewis below and had been in use since houses were first built there in the 1920s.

The antics have sparked fury with locals in Stormtown.

One woman said: “It’s lovely here, or at least it was. Since Chris bought the field there’s been noise from lorries going back and forth, materials being dumped, loud machinery at all hours and blinding lights shining through our windows at night.

“He’s even starting to fence off the whole area – it’s very stressful.

“Stormtown is a really tight-knit community and those that live here tend to stay put. Very few decide to move elsewhere.”

She told Wales Online the steps were a “claimed right of way” and feature on the deeds to many of the properties in the area.

The only other way out of Stormtown for pedestrians is a winding rural road which has no pavement.

The sole bus route through the community is every hour.

Mr Rees, who owns Step Up Recycling Ltd, stated the field is private property and was not being used for commercial purposes.

He added that the land had been a waste dumping ground before he acquired it and that there would inevitably be “inconvenience” to those living nearby while the process of tidying it up was ongoing.

Mr Rees continued: “However, they are under the impression that I am not the legal owner of the land and have continued to make false statements that could potentially cause me a lot of trouble.”

As a result, Rees said he decided to stop “certain individuals” accessing his land.

“Sadly though, that means other residents will also lose that privilege. I believe I am within my rights to do this as the route in question is not a public right of way.

“It is not marked on the definitive Merthyr Borough map and residents are not legally allowed to use it.”

Merthyr County Borough Council is understood to be currently investigating the matter and has been approached for comment.