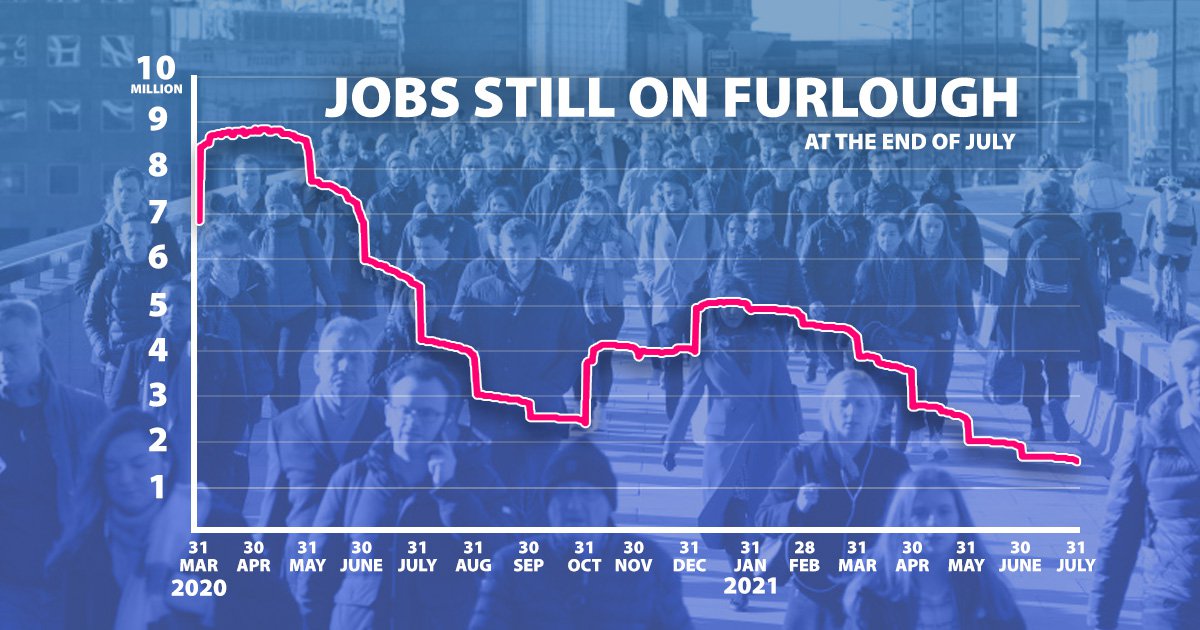 The £70 billion furlough scheme ends today after supporting millions of British workers through the pandemic for 18 months.

But uncertainty remains for the future of almost one million people who are still signed up to the programme, according to the latest ONS figures.

Economists have warned that although many may find work in recovering sectors such as hospitality and travel, there is also likely to be a rise in unemployment due to new redundancies.

Chancellor Rishi Sunak is reportedly set to announce a new programme of grants to help poorer households cope with the cost of living over the winter.

Alan Custis, head of UK equities at Lazard Asset Management, said the rate of unemployment, which dropped to 4.6% last month, is likely to swing higher again.

‘There will also be a percentage who choose retirement over returning to work, but we would expect the unemployment rate to settle at around 5% for the year end, before falling in 2022,’ he said.

Mr Custis added that other countries, such as the US and Australia, saw unemployment spikes when similar financial support for workers came to an end.

A plan may be announced in the coming days that could see up to £500 million distributed through local authorities.

The programme would replace the Covid local support grant, which ends Thursday, which enabled local authorities across England to support those struggling with costs including for food, energy and water bills during the pandemic.

The Treasury declined to comment. The end of furlough also comes amid record UK vacancy figures, with the latest Office for National Statistics data for August reporting more than one million available jobs for the first time on record.

There have also been significant hiring sprees amid labour shortages for HGV drivers, warehouse staff and food production workers.

Nevertheless, Samuel Tombs, chief UK economist at Pantheon Macroeconomics, said he has ‘doubts’ as to whether broader consumer demand will have jumped enough by October to re-employ all staff who remained on furlough.

As a result, the Liberal Democrats have called for furlough support to be extended for the 10 most affected sectors to avoid a ‘tidal wave’ of job losses.

In a letter to Mr Sunak, Liberal Democrat Treasury spokesperson Christine Jardine said furlough should be extended for another six months for the 10 sectors, which include air travel and photography, in a move it claims would cost around £600 million.

Ms Jardine said: ‘The withdrawal of furlough risks having a devastating impact on countless families already facing a winter of soaring energy bills.

‘The Government needs to rethink its approach or the country could face a Coronavirus Black Thursday.’

However, leaders at trade bodies for heavily impacted sectors are now looking beyond the furlough scheme to appeal for policy reform in other areas.

Kate Nicholls, chief executive of UKHospitality, said: ‘With businesses currently experiencing a record number of vacancies, our hope is that those seeking employment will consider the varied and exciting opportunities a career in hospitality offers.

‘With the right support and conditions, the sector has the potential to be at the forefront of the economic recovery.

‘In order to drive further job creation, we urge Government to implement a long-overdue reform of business rates and a permanently lower rate of VAT for hospitality and tourism in order to help fragile businesses back on their feet.’