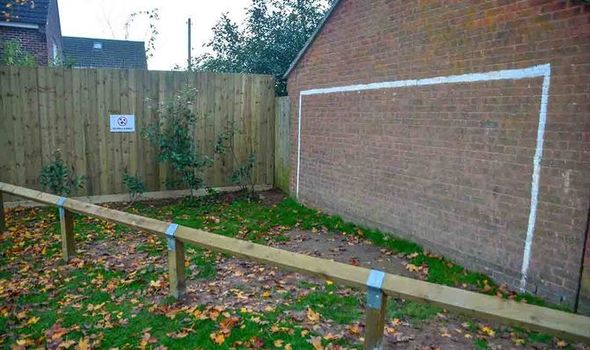 The diagonal rail was put up alongside the corner of a children’s park which crosses the outline of the goalposts – making it virtually impossible to use. The authorities said it was their duty to ensure activities in the play area “do not cause a nuisance to residents of nearby properties”.

But children have used the goal for 35 years, ever since it was painted on the wall by Brian Reeby, a resident in Cullompton, Devon.

He said problems started when a minority of neighbours living nearby started to complain and at one point things got so heated that police had to be called to the scene.

The authorities said it therefore had a “duty of care” to act, Devon Live reports.

But parents branded the move “pathetic”.

Writing on Facebook, one mum said: “Absolutely pathetic… The country has gone mad.” Another user shared: “How spiteful.”

A third wrote: “People moan when kids hang out on streets, but then moan when they’re not doing any harm or causing any trouble playing footy.”

One message simply reads: “What’s the world coming to?”

But there were also some people who believed the councils had done the right thing. One said: “There is nothing more annoying than kids kicking a football against a wall. The constant thud thud thud. You can’t have peace and quiet even in your own home.”

In a joint response between Mid Devon District Council and Cullompton Town Council, the authorities said it had a “duty of care” to act.

A spokesperson said: “Headweir Road play area is land owned by MDDC and run as a play area by Cullompton Town Council.

“While we appreciate that the gesture to repaint a goal on the garage wall facing into the play area has been carried out in good faith, this area has been marked as a no-ball games area and has been for some time following previous concerns.

“Both councils have a duty to ensure that activities taking place in a play area do not cause a nuisance to residents of nearby properties and to ensure no damage is done to premises or neighbouring properties.”

They added: “The town and district councils are keen to work together with residents to ensure both children, who wish to play ball games, and other residents have their views taken into account and have facilities nearby which they can freely use.

“There is a park around 500m away from Headweir Road accessed via Fairfax Drive, and an additional one around 1km away and which is more suitable for football games at Upcott Fields St Andrews Estate.

“The town council has started planting shrubs in Headweir Road, so this area can become a site for wildlife and habitat creation.

“Both councils have to balance the needs of everyone in the community, and we understand this can cause upset on occasions and that sometimes disputes do occur.”