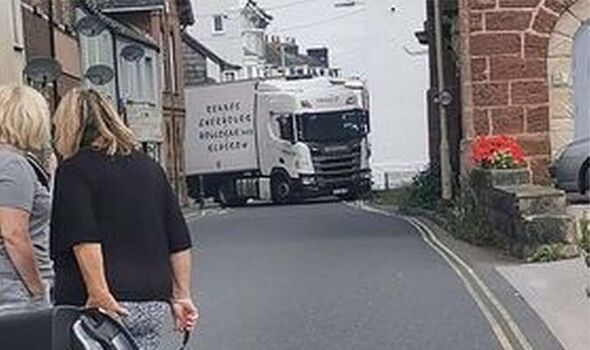 Another lorry driver stopped to help him negotiate his way out of the corner the HGV was stuck in. Huge traffic jams were also caused by the incident and people got out of their vehicles to watch the drama.

One resident said that the driver didn’t speak English which made it difficult for him to follow instructions as other lorry drivers tried to advise him.

Roof tiles on the side of one building were damaged along with a drainpipe during the 25 minute operation to clear the road, Devon Live reports.

Becky Green who took the picture and posted a warning to avoid Starcross, said: “It was stuck there for about 25 minutes.”

The lorry is from the giant Mesguen transport firm based in St Pol de Leon in Brittany, France. The side of the truck read: “Rennes, Cherbourg, Boulogne, Glasgow.” One local commentator laughed: “Haha the side should read New York, Paris, Peckham” in reference to Del Boy Trotter’s van in Only Fools and Horses.

Residents say similar sights are becoming a common occurrence since ‘crazy’ new road safety measures were introduced which made the corner even narrower.

The HGV was stuck on the A379 near Brunel’s historic Engine House.

A resident who didn’t want to be named said it happened so often since road safety measures were introduced that he doesn’t bother to take pictures any more.

He said: “It was there for ages. I was at home. I live right on the main road and I heard the engine revving and stuck my head out the door. There was a truck stuck on the corner and a car in front of it. Nobody was going anywhere.

“It happens all the time. It’s where they put in the new road control measures. They’ve just made it worse. They extended the pathway and now the road’s actually even narrower than before. It’s crazy. All they needed to do was put up traffic lights. Everybody who goes in the pub just moans and moans about it. “

And another added: “Ain’t no rubber pavements gonna sort this traffic jam bro.”