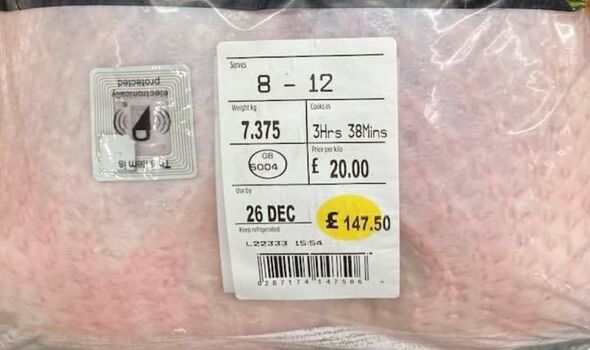 Social media users have erupted after a bemused shopper shared a photo of a £147.50 Christmas turkey on Twitter. The bird, reportedly from supermarket Morrisons, was described as an organic bronze turkey, that had been “free to forage in open pastures” and was “naturally slower growing for a fuller flavour”. Despite serving between eight and twelve people, the seven kilogram turkey has gone viral for its costly price tag.

The post quickly generated a fierce response on the social media platform as people hit out at rising Christmas expenses amid the cost of living crisis.

User @adcogfx said: “[It] would be cheaper to buy an actual bronze turkey.”

Another user @MarcDan83224371 added: “And at three hours 38 minutes cooking time, it’ll cost a further £276.20 in energy to achieve the correct level of dryness and tastelessness.”

While some users were quick to judge the hefty price tag, others highlighted the quality of the poultry.

@ClaireEMitchell wrote: “Organic turkeys will have had a better quality of life than non-organic and some people are willing to pay extra for things like this.”

@ian_pimlott added: “Calm down, it’s a specialty product that costs a lot more than normal to produce – 99 percent are cheap, not like this.

“[It’s] like posting a picture of a Ferrari price tag and saying all cars are expensive. [It] needs some perspective.”

Despite the emphasis on the quality of the turkey, some users were still frustrated at the sight of a supposedly affordable supermarket branching out into luxury products.

@westrowhendo wrote: “[I] thought Morrisons were supposed to be cheap, but this is only £2.50 cheaper than Fortnum and Mason for the same sized bird.”

Fortnum and Mason is a department store brand renowned for upmarket products, and not typically positioned in a comparable price bracket to the average British supermarket.

The same Twitter user added: “Waitrose is only charging £14 a kilogram for free range bronze turkeys, so £103 for one this size.”

The startling price reportedly captured in Morrisons comes as the cost of fresh turkey has risen following an outbreak of bird flu.

The recent spread of avian flu across the UK has wiped out an estimated 1.6 million birds, causing the price of turkey to rocket by up to 45 percent amid shortages.

Out of four leading supermarkets, The Grocer reported Morrisons had marked the largest price increase on their turkeys this year.