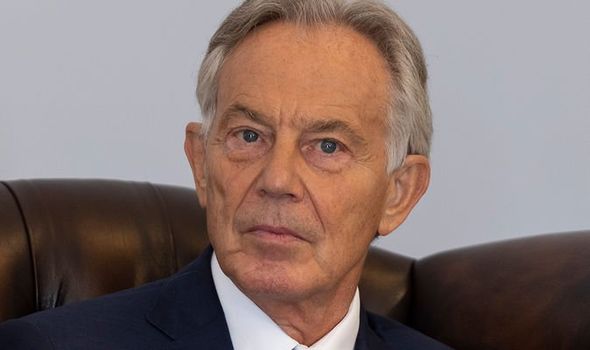 News of the former Labour prime minister’s elevation to the Order of the Garter as a Knight Companion dismayed opponents of the invasion of Iraq who consider him a “war criminal”. Former Labour and Respect MP George Galloway said: “Arise Sir Tony Blair, the mass-murdering War Criminal, liar and mountebank. It literally takes the biscuit.”

Journalist John Pilger said: “The contempt in which Britain’s elite holds the public has never been more eloquently expressed than in the decision to award Tony Blair the highest order of knighthood.

The honour for Mr Blair comes 14 years after the new Labour architect left Downing St. Decisions about who joins the ceremonial order, which dates back to 1348, are made without advice from the Prime Minister.

The reaction to the announcement shows that longstanding critics of Mr Blair have not cooled in their anger.

Former Plaid Cymru leader Leanne Wood said: “I’ve always seen the problems with the monarchal patronage honours system, but knighting a man who should be answering to war crimes utterly discredits it.”

Lee Anderson, the Conservative MP for Ashfield, was not impressed by the 68-year-old’s knighthood.

He said: “Most people will agree that there are many more deserving people of this award than Tony Blair. There is a reason why he has waited over 14 years for this award and I suppose some people will say it’s for public service.

“I would say he has done very well financially from his time in politics and that should be enough reward for a man who is now deeply unpopular in places like Ashfield. People will be looking at this and thinking the honours system needs reforming and I agree.”

However, Tom Tugendhat, the chairman of the foreign affairs select committee who served as an army officer in Iraq and Afghanistan, said: “A knighthood of the Garter is the Queen’s personal gift. All former Prime Ministers have got it so I’m no sure why it’s surprising.”

Senior Conservative MP Sir Bernard Jenkin welcomed the honour, saying: “I am delighted for him and it is a fitting honour for one of the most effective PMs of our time, albeit he now regrets mistakes like the Freedom of Information Act and the way Labour went about Scottish devolution.”

Richard Tice, the leader of Reform UK acknowledged that the invasion of Iraq was a “mistake” but said he deserved the knighthood because he “oversaw much improvement in education and healthcare in his tenure”.

Mr Blair said: ”It is an immense honour to be appointed Knight Companion of the Most Noble Order of the Garter, and I am deeply grateful to Her Majesty the Queen.

”It was a great privilege to serve as Prime Minister and I would like to thank all those who served alongside me in politics, public service and all parts of our society, for their dedication and commitment to our country.”

Former defence minister Mark Francois said he wanted to know if “fellow knight Sir Keir Starmer” had nominated him and “if not him, then who?”