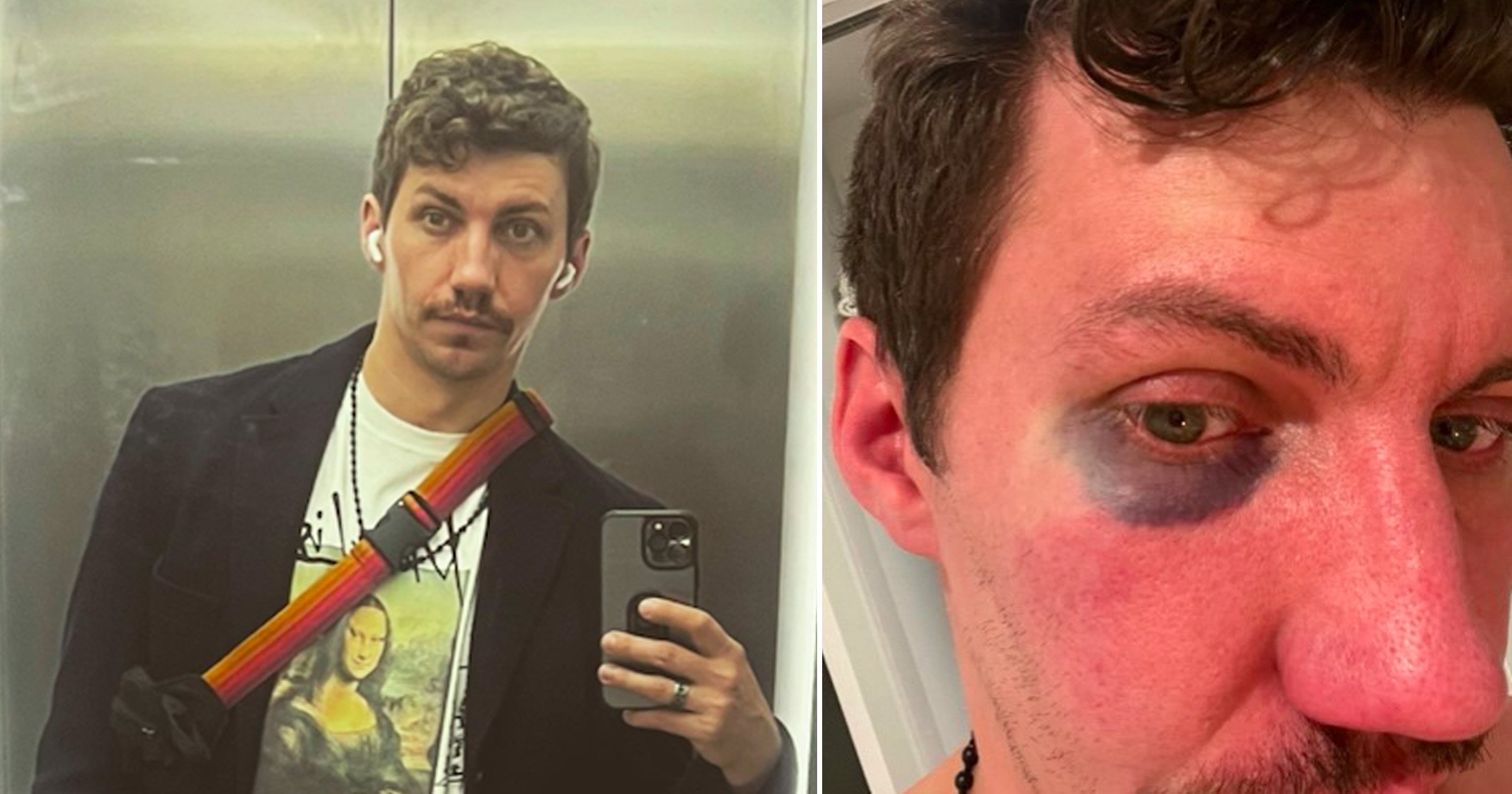 A gay man was enjoying a fun night out with friends when he was randomly attacked by three strangers – with one shouting ‘what you looking at f****t?’

Matthew Dowiat, 34, says he normally feels safe as a homosexual man in the UK after he moved over from Poland where LGBTQ+ rights are under threat.

But he was in ‘shock’ when he was left with a black eye and bruising across his body in the early hours of Sunday morning.

Two strangers have been named heroes after they swooped in to save Matthew who believes he was ‘lucky’ the brutal assault wasn’t worse.

Avon and Somerset Police have been unable to find CCTV evidence and are urging people with information to come forward as they try to track down the assailants.

Retail managerMatthew says he was ‘in such a good mood’ walking across Castle Park in Bristol to a nightclub with a friend when a man suddenly tripped him up.

Speaking to Metro.co.uk, he said: ‘They were all wearing hoodies. One of them started walking beside me and put his leg out so I could trip over. I trip over and say “what was that about?”

‘I was punched and he shouted “what you looking at f****t?” It escalated from there.

‘I took a hit on my cheek, I’ve been kicked on my back and the side of my leg which is just completely bruised.’

Matthew has credited his friend and two other men who stumbled upon the attack for protecting him from more serious injuries.

He said: ‘I was with my friend who was trying to push them and two other guys intervened to protect me.

‘I don’t know what would have happened without them. The attackers basically disappeared after that.’

Matthew says he doesn’t remember much ‘because he blurred out after taking the hits’.

But he is certain it was a homophobic attack ‘because of the slurs the men used’.

He said: ‘They were just going for me, not my friend. I don’t know why they chose me specifically. Maybe I was just looking happy and they wanted to ruin my mood?

‘People shouldn’t judge others by the way they look or how they walk or other things. I felt like a victim. I would never do that to another human being.

‘I treat everyone with respect, regardless of nationality, race or sexuality. I want to use this as an opportunity to send a message that it’s not okay to treat another human being like that.’

Around 100 towns and villages in Poland were declared ‘free of LGBTQ+ ideology’ back in July.

But provinces began to backtrack on the ban of pride parades and other gay-friendly events after the EU threatened to pull funding.

Same-sex relationships are not legally recognised in Poland, and the country stops same-sex couples from adopting children.

Matthew, who moved to London 13 years ago, said: ‘I normally feel safer in the UK as a gay man. However, the incident really put that in question.’

It comes after a lesbian couple was left covered in blood after refusing to kiss for a gang of men on a bus in the capital in 2019.

A statement from Avon and Somerset Police said: ‘Police were called to St Augustine’s Parade in Bristol at about 12.45am on 28 November, where a man was being treated for injuries following an assault.

‘He said he was attacked by three men in Castle Park who punched him in the face at least once, leaving him with a swollen cheek.

‘He described his attackers as three men of east African or Middle Eastern appearance, all wearing black trousers and hoodies.

‘He said one wore white trainers and a black padded jacket with fur round the hood.

‘Officers carried out CCTV enquiries at the time but found no positive lines of investigation.

‘The crime was recorded as an assault causing actual bodily harm, as there was no reference to homophobic abuse.

‘Having spoken to the victim again, supervisory officers are now reviewing this, with a view to re-recording it as a hate crime.’