GB News host Colin Brazier warned that Prince William and the Queen may struggle to win over hearts in Scotland. While discussing the pair’s trip to Scotland this week, the host noted some why some Scots may not support the Queen and the monarchy. He argued the way William and the Queen sound may not align with the Scottish public who, historically, have long warred with the British.

Mr Brazier noted the Royal Family would have to overcome this if they were to help strengthen the Union ahead of a Scottish independence referendum.

“The love is not evenly spread, for one thing, the young are less fervent than the old.

“This is a division that has deepened since Prince Harry and Meghan Markle interview with Oprah Winfrey and those allegations of racism. 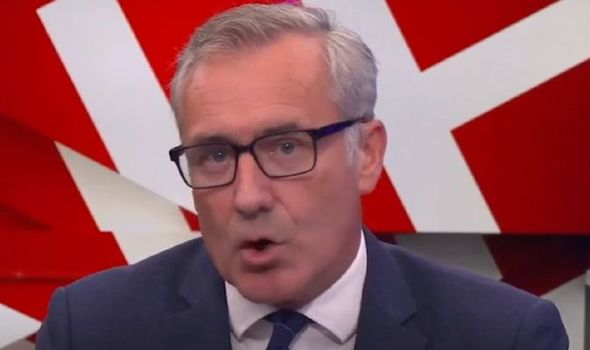 “But the Palace has another problem.”

Mr Brazier highlighted the feelings towards the Royal Family in Scotland.

He said: “Scotland is more inclined than Republicanism than England, not by much but enough to give sleepless nights, this is especially true with another independence referendum looming.

“This then sets the context for the Queen in Scotland today or what is known as Holyrood week.

“The Queen was visiting an Irn Bru factory in Cumbernauld yesterday flanked by Prince William.

“The Queen’s sparkling reign is now in its twilight but what about her grandson?.

“How much kingdom will be left for King William.”

“Part of the Royal Family’s Scottish problem is the way she sounds.

“Her ancestry may be Scottish but a new breed of nationalists, accent can seem like a hallmark of authenticity.

“The Queen can’t change the way she speaks, nor can William, he went to school in Eton, not Easterhouse.

“There are other ways to show your love of country, like living there, for instance.”