Queen's funeral: George and Charlotte bow to as the coffin arrives

Walking with parents the Prince and Princess of Wales, nine-year-old George and his seven-year-old sister – who both lovingly called the Queen “Gan Gan” – were the youngest royals to take part in a state occasion. Their impeccable behaviour may have revitalised support for the monarchy. 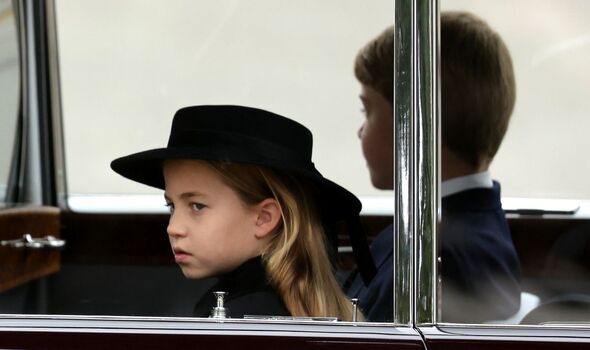 Composed throughout the service, Charlotte wept briefly as the Queen’s coffin was placed in the hearse at Wellington Arch.

As she wiped her eyes and was comforted by her mother, her brother also held back tears.

Charlotte was seen whispering to her big brother, appearing to tell him “You need to bow” as the Queen’s coffin passed before the family travelled on to Windsor Castle.

Second-in-line to the throne George was resplendent in a tailored navy suit with crisp white shirt and black tie. While his third-in-line sister matched her black frock with a black mourning coat pleated at the back, velour collar and wide-brimmed hat with a bow-tied ribbon.

Touchingly the Princess wore a horseshoe brooch, in honour of her great-grandmother’s lifelong love of horses. 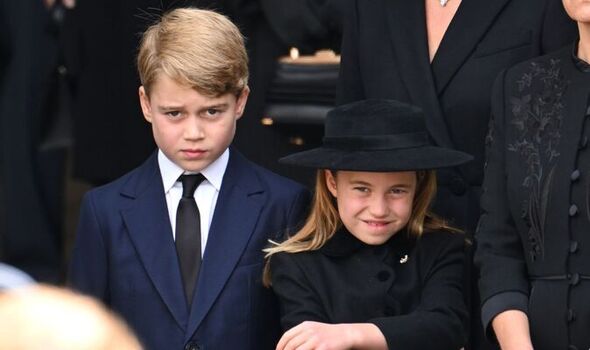 Earlier the children had travelled in a procession car with their mother and Camilla, Queen Consort then waited at the Abbey’s Great West Door.

They bowed and curtsied to Queen Elizabeth as her coffin was carried by before walking in behind it. Charlotte had gripped her mother’s hand while they waited for her father, who had walked in the procession from Westminster Hall.

The Princess of Wales took her daughter’s hand to guide her into position, as the Royal Family walked up the aisle.

The children were followed in by their uncle and aunt the Duke and Duchess of Sussex but their four-year-old brother Prince Louis watched the service on television with nannies at the family home, Adelaide Cottage in Windsor.

Prince George sat between his parents on the front row of the congregation for the funeral service as Princess Charlotte, seated to her mother’s left, glanced around from under the wide brim of her hat while fellow mourners sang the hymn The Lord’s My Shepherd. 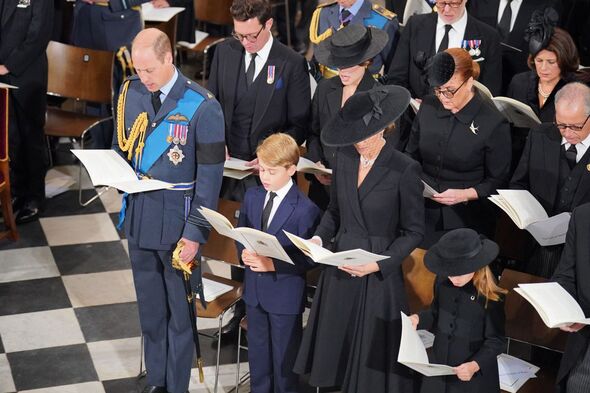 George, who appeared to marvel frequently at the grandiose surroundings, was seen singing The Day Thou Gavest, Lord, Is Ended with gusto.

At one point the Princess of Wales comforted her oldest child with a hand on his knee.

During the sermon given by the Archbishop of Canterbury, George was keen to read the order of service while Charlotte whispered to her mother.

At the end of the service, George followed his father and Kate put a guiding hand on Charlotte’s back as the four stood behind the coffin. Both children looked down at times as they filed out slowly.

The Queen’s great-grandchildren, who were also at Prince Philip’s memorial service in March, then made their way with their parents to the committal service at St George’s Chapel in Windsor Castle.

Having spoken about the difficulty he felt as a 15-year-old walking behind his mother Diana’s cortege, William – and Kate – had lengthy talks with courtiers before confirming their two older children were ready to take part in a procession.

But it was decided Louis, whose antics delighted millions during the Queen’s Diamond Jubilee in June, was too young.

William has revealed how he and Kate are “trying to keep everything constant” for their family since Her Majesty died.

Speaking with well-wishers outside the Sandringham Estate in Norfolk, the Prince had said his children were “settling in” to school after their great-grandmother passed away during their first week of term.

He insisted that they were “doing ok”, adding: “We’re trying to keep everything constant and settled for them.”

Talking to Australia’s Governor-General at a reception for Commonwealth dignitaries ahead of the funeral, the Princess of Wales revealed that Louis had been asking lots of questions – but was still struggling to come to terms with the scale of recent events.

General David Hurley said the Princess had told him that Prince George is “sort of now realising how important his great-grandmother was and what is going on”.

Whereas Prince Louis has been enquiring whether the family’s summer visits to Balmoral Castle near Aberdeen will still continue.

General Hurley added: “The younger one is now asking questions like, ‘Do you think we can still play these games when we go to Balmoral?’ and things like that, because [the Queen is] not going to be there.”