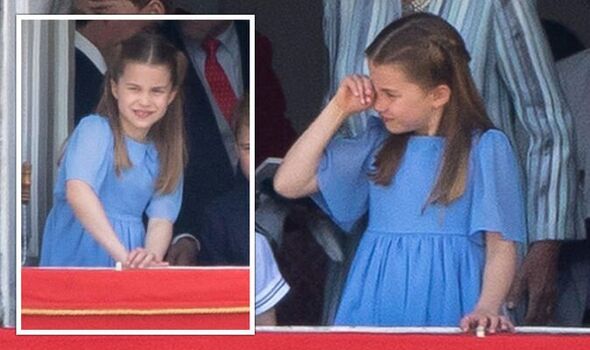 For the first time, the three children of the Duke and Duchess of Cambridge have taken part in the carriage drive leading up to Horse Guards Parade. This debut marks an important milestone for George, eight, Charlotte, seven, and Louis, four, as it highlights their parents are slowly but surely introducing them to royal duties. The carriage drive took the adorable royals to Horse Guards Parade, where they joined other members of the Royal Family, including Meghan, Duchess of Sussex, and Prince Harry.

Together they watched the parade from the Major General’s Office.

Charlotte, George and Louis later stepped onto the Buckingham Palace balcony together, joining the Queen and all the full-time working royals supporting her.

The little Cambridges’ participation in the carriage drive had been rumoured in the past few weeks, with some royal watchers pointing out Prince William had made his debut at this traditional event when he was Prince Louis’s age.

The Duke and Duchess of Cambridge have made a few key public appearances over the past few months with their eldest son and daughter.

In March, Charlotte and George accompanied Kate and William to Westminster Abbey to attend the memorial service for Prince Philip.

The little royals were praised for looking natural as they shook hands and exchanged a few words with the clergymen lined up to welcome the guests prior to the event.

In April, the two children also attended the Easter Sunday service at St George’s Chapel alongside other members of the Royal Family, including Sophie, Countess of Wessex, Zara Tindall and the Gloucesters.

Given his age, Prince Louis has attended fewer major events.

During Trooping the Colour 2019, he made his debut on the Palace balcony.

In December 2020, he walked down the red carpet at the London Palladium alongside his family and was among the spectators of a special panto performance dedicated to frontline workers.