For organisers of Saturday’s central London rally, it had been a very promising start to the day.

I have rarely seen Parliament Square and the surrounding streets as packed as they were for this event.

It was a defiant rejection of the government’s appeal to stay away.

Home Secretary Priti Patel had just hours earlier warned of the potential risk to the lives of protesters and to the wider community because of the ongoing coronavirus health emergency.

The protesters I spoke to said they were more than aware of the potential risks of crowding into the streets around Westminster, but it was a risk they were prepared to take.

The message, they said, was just too important to stay at home.

Around Parliament Square, there was absolutely no chance anyone could effectively socially distance themselves from one and another.

Protesters were shoulder to shoulder, but most did at least have masks on.

By mid-afternoon, a large crowd of more than 1,000 gathered on Whitehall, just outside Downing Street. 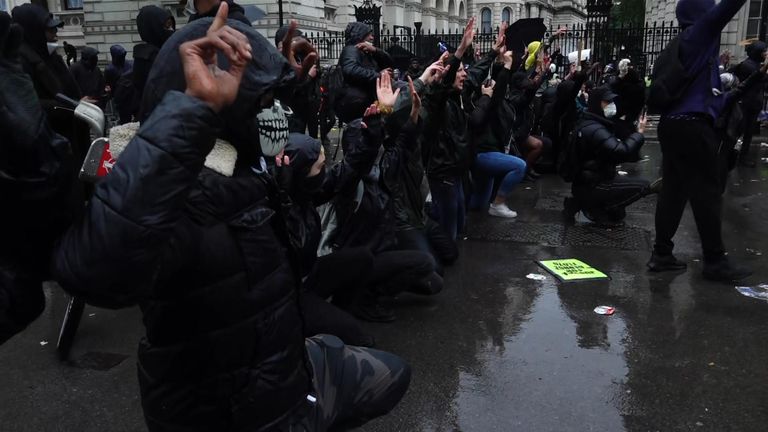 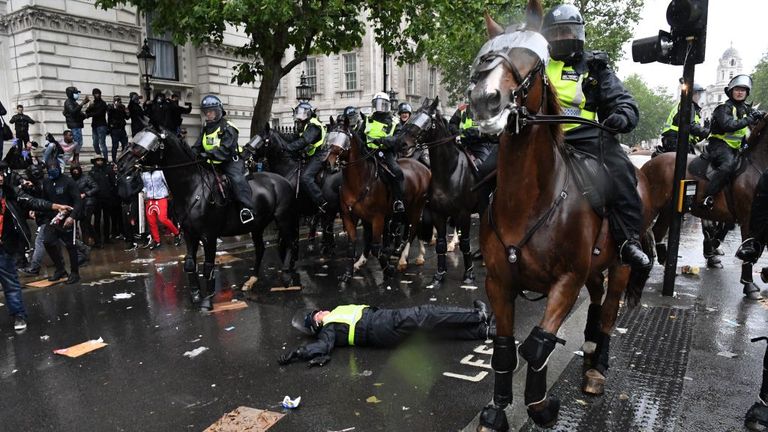 They were noisy, but peaceful for the most part.

The mood though began to change around about 5pm. The chants towards the police were more hostile and abusive.

Throughout these demonstrations, Scotland Yard commanders had been keen to adopt a low profile policing strategy.

They knew the sensitives of many in the crowd meant too many police on the streets would have been counter-productive, and risk inflaming already heightened tensions. 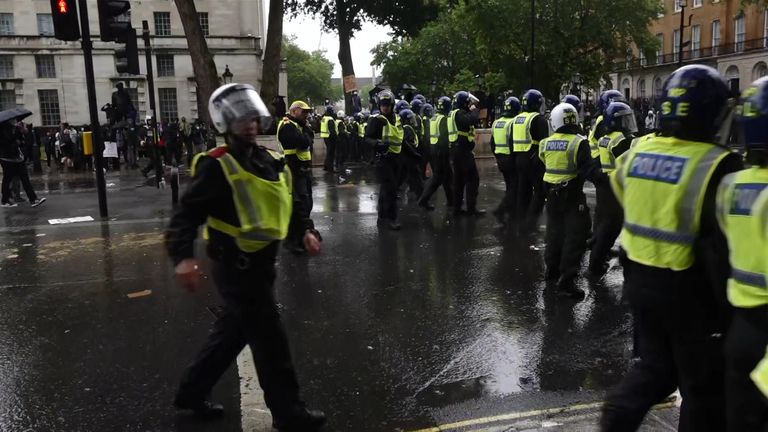 And so pockets of police guarded some sensitive buildings and police liaison officers mixed with the crowds. But most officers were kept out of sight in nearby streets.

Less than a minute later, dozens of fully equipped public protection officers, with helmets and shields filed out the gates to take over from their less well protected colleagues.

Over the next few minutes the situation deteriorated to the point police commanders called in mounted officers.

As they pushed protesters far back down Whitehall, away from Downing Street, an officer was thrown from her horse as they collided with a traffic light.

There was a sickening thud as she was tossed violently to the ground, her horse bolting past protesters and police back up Whitehall.

Scotland Yard told me the officer is still in hospital but thankfully did not suffer life threatening injuries.

For a while our camera team was caught between police and protesters, trying to report live and avoid the odd bottle tossed in our direction.

For around an hour there were sporadic clashes. The stand-off between protesters and police ran well into the night.