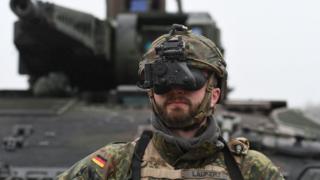 Army general inspector Eberhard Zorn said the forces had to “look in all directions in times of a lack of qualified personnel”, such as doctors and IT specialists.

The armed forces have been beset by years of under-investment.

It has also pledged to raise its defence budget from 1.2% to to 1.5% of its gross domestic product by 2024, in the face of criticism from President Donald Trump that it does not meet the Nato target of 2% of GDP.

Defence Minister Ursula von der Leyen said in an interview on Thursday that 182,000 uniformed soldiers were now employed by the army, a rise of 6,500 in two years. Within seven years, that should reach 203,000.

She said the army was now made up of 12% women and this year alone one in three people applying to be an officer was a woman.

What does the defence chief propose?

Gen Zorn told the Funke newspaper group that “of course the Bundeswehr needs personnel” and the army had to “push hard for a suitable new generation”, although EU citizens in uniform were “an option” to be examined only in specialist fields.

The media group said the government had already consulted EU partners and that most had reacted cautiously, particularly in Eastern Europe.

Under post-World War Two laws, soldiers in the German military have to be German.

Parliament’s commissioner for the armed forces, Hans-Peter Bartels, said recruiting EU citizens was already a “kind of normality” as many soldiers already had dual nationality or an immigrant background.

According to the Funke group, more than 900 foreign citizens are already employed by the military in civilian roles.

The spotlight fell on military shortages late last month when Chancellor Angela Merkel had to fly to the G20 summit in Argentina by passenger plane because of a technical failure involving one of the military’s two long-haul planes.

Ms Von der Leyen said one or two new long-haul planes would be bought, as the two existing planes aged 18 and 19 were too few.

The technical failure involving Mrs Merkel’s government plane has been blamed on German airline Lufthansa, according to a report in Der Spiegel.

When the pilots tried to reboot the A340’s electronics during an in-flight power failure they were unable to restart the radio.

According to a confidential report cited by Spiegel, the pilots had not been informed of new instructions to restart the radio after Lufthansa’s technical subsidiary installed a digital communications system in 2009.

Her Majesty reached out to the Prime Minister’s girlfriend, who is expecting her first child, as well as Mr Johnson’s family. The Royal Family’s official…

THE UK coronavirus death toll has broken the 6,000-barrier after 758 deaths were recorded in England alone on the deadliest day so far. NHS England…