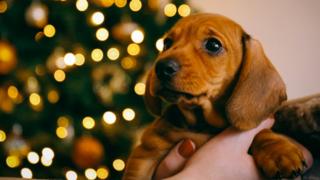 A dog is for life, not just for Christmas – so the famous slogan goes.

It’s certainly the case in Germany, where a temporary ban on new adoptions aims to cut short any plans to give an animal as a Christmas gift.

Dozens of shelters have told potential pet owners that no animals will be handed over in the run-up to Christmas.

Berlin’s shelter, the largest in Europe, is among them. It says the ban reduces unwanted animals being dumped back after the holiday period.

“Animals are living beings with needs and feelings,” it said. “They are not suitable as surprise gifts.”

In Bremen, none of 500 animals will be re-homed after 18 December.

Regional news outlets are reporting similar decisions in other towns and cities, including dozens of shelters in a united decision in Lower Saxony.

The problem, according to the ban’s supporters, is that pets are often bought impulsively at the last minute.

“The decision to keep an animal must not be taken lightly – the whole family must be involved in the decision-making process,” said Claudia Hämmerling from Berlin’s animal protection association.

Most shelters will still be open for viewings – but families will have to come back in January after they’ve had time to consider.

Not everyone agrees with an outright ban.

In the UK, animal protection group RSPCA says the person receiving the pet should be known to be willing and ready – and highlights the extra noise, hustle and bustle at Christmas that “can make it difficult for any pet to settle into their new homes”.

“However, for some people, the festive period is a calm, quiet time and may well be a good opportunity to introduce an animal into the home as families tend to be around the house with more time to spend with them,” it says.

Their US counterpart, the ASPCA, largely agrees.

But the Dog’s Trust – author of the famous slogan about dogs being “not just for Christmas” – is still running adverts to that affect nearly 40 years after it first coined the phrase.