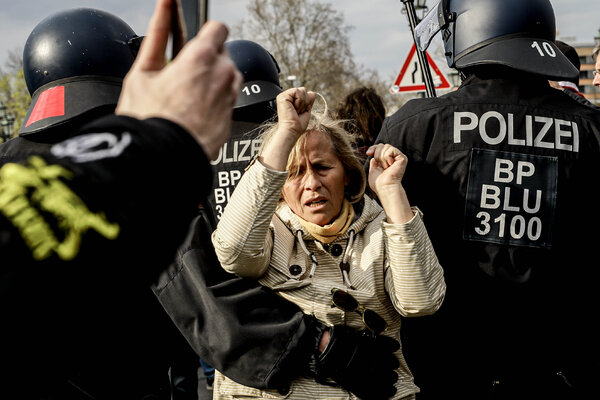 The German domestic intelligence agency is keeping close tabs on a group of coronavirus deniers, who, in their protests against restrictions and tendency to believe in conspiracy theories, have found common cause with far-right extremists.

Government officials said the movement’s close ties to extremist organizations, such as the “Reich citizens” — or “Reichsbürger,” as they are known in German, referring to a group that refuses to accept the legitimacy of the modern German state — were troubling. Many of the coronavirus deniers say they also believe in QAnon conspiracy theories, and protesters are frequently seen holding signs with anti-Semitic tropes. A number of journalists have been attacked while covering the demonstrations.

A spokesman for the Interior Ministry said in a statement, “Our basic democratic order, as well as state institutions such as parliaments and governments, have faced multiple attacks since the beginning of the measures to contain the Covid-19 pandemic.” Several regional intelligence agencies have already been observing participants in the movement, he added.

The group of deniers, which started as a fringe movement last spring, has grown into a coordinated effort that organizes mass demonstrations across Germany. The rallies occasionally turn aggressive, and many have ended in scuffles with law enforcement officers.

Members of the group, which goes by “Querdenken” or “lateral thinking” in German, coordinate over Facebook, Telegram and YouTube. Parts of AfD, a German right-wing populist party, have allied themselves with protesters. The national intelligence agency’s formal observation of the deniers’ group is the first step in a procedure that could lead to it being declared anti-constitutional and ultimately banned.

A week ago, about 8,000 people in Berlin protested the passing of a law that gives the federal government power to implement tougher restrictions. Germany has seen a persistently high average number of new daily cases recently, averaging about 18,000 a day, according to a New York Times database, up from about 8,000 a day two months ago.