BERLIN — In the heart of Berlin, where memories of the Gestapo and the Stasi remain and distrust of secret-service agencies still runs high, Germany has opened what is being called the world’s largest intelligence service headquarters.

Chancellor Angela Merkel was on hand on Friday to inaugurate the massive, $1.23 billion complex, which stands on 26 hectares (about 64 acres), but in keeping with the secret mission of the place, dignitaries and members of the news media were not allowed deep into the building.

The notoriously understated Ms. Merkel said in a briefing room: “I have to say quite honestly: This modest conference room does not even give any idea of what is actually hidden behind the gates. I would say it would impress any foreign intelligence service.”

In extolling the building, whose interior is a state secret, Ms. Merkel was apparently hoping to seal the post-Cold War transition of Germany’s Federal Intelligence Service — the Bundesnachrichtendienst, or BND — and to cast it as a necessary defense in an increasingly complicated and dangerous world.

“The Federal Intelligence Service has successfully accepted the change in its mission since the end of the Cold War,” she said. “Today, it observes events worldwide for the government.”

The other agency, the Verfassungsschutz, is responsible for domestic intelligence and has recently been in the news for surveilling the Alternative for Germany, the right-wing anti-immigrant populist party.

In 2013, revelations in the Edward Snowden case that the Federal Intelligence Service had worked closely with American intelligence operations caused a public uproar. More recent reports that the service had spied on European Union allies and foreign journalists have sullied its image. Last year, it saw off a lawsuit brought by a Berlin newspaper, with a panel of judges ruling that the service was not legally obliged to answer requests from journalists. 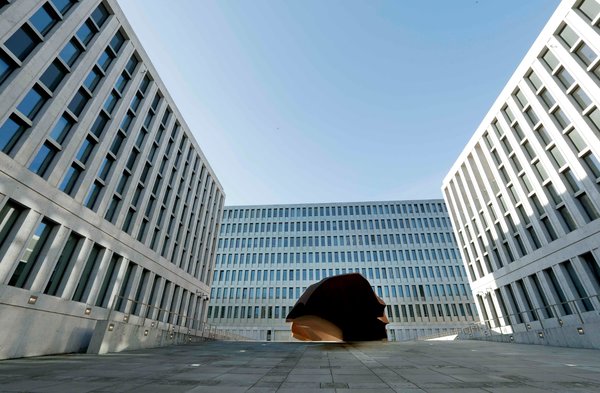 Since its founding in 1956, the service had been based in Pullach, a suburb of Munich, where its predecessor was housed on part of a Nazi estate. Links to the Nazi regime were not confined to the physical space: The first president of the service was Reinhard Gehlen, who had been a Wehrmacht general responsible for military intelligence in the Third Reich. After the war, he helped American forces coordinate intelligence activities aimed at the Soviet Union.

In the service’s first years, many other low-ranking officers were former Nazis or Wehrmacht officers, too. In some cases, the service used their connections to track wanted Nazis after the war. Last year, it was revealed that Heinrich Himmler’s daughter had worked for the service as a secretary.

The headquarters’ move away from the outskirts of Munich is the final step in its decade-long push to modernize, and it offers a chance to make a symbolic move back to a unified modern Germany, away from old Nazi ties.

The gleaming beige and gray complex now sits just over a mile northeast of Ms. Merkel’s airy chancellery. Although construction started in 2008, it wasn’t finished until late in 2017, and was not fully staffed until January this year, several years behind its initial schedule.

The move from the old Munich headquarters took more than a year and included some 100,000 moving boxes and 58,000 pieces of furniture and equipment. Although it is not known exactly how many of the service’s roughly 6,500 employees work in the new Berlin headquarters, the building has space for about 4,000 workers, according to a media statement.

By way of comparison, the Russian intelligence services have no single headquarters but occupy several buildings in different parts of Moscow. The Foreign Intelligence Service, known by its Russian initials, the F.S.B., is in the Lubyanka, a big but not gigantic building in the center of the city, while the S.V.R. — the foreign intelligence arm of the old K.G.B. — has its headquarters in a wooded area in the Yasenevo District.

The new Federal Intelligence Service building has 14,000 windows and 12,000 doors, the agency says, and its construction involved 135,000 cubic meters of concrete and 20,000 tons of steel. According to The Guardian, the building was originally scheduled to be finished in 2011, but its opening was delayed by construction woes and other problems. Thieves damaged toilets in the building in 2015, the news site said, causing flooding — an incident Germans described as “Watergate.”

Germans are notoriously mistrustful of intelligence services and protective of their privacy. In a 2016 poll, only 26 percent of respondents said they had any trust in the Federal Intelligence Service, making it the least-trusted public agency. Trust in the police, by comparison, was at 77 percent, according to the poll.

“A healthy distrust is helpful,” said Ms. Merkel in her opening remarks on Friday. “But being overly suspicious is a hindrance,” adding: “Peace is more fragile than we had hoped after the end of the Cold War.”

The new building does not appear to have brought an immediate increase in trust. In January, the Berlin Senate had to officially confirm that there were no listening devices hidden in a pair of decorative fake palm trees outside.