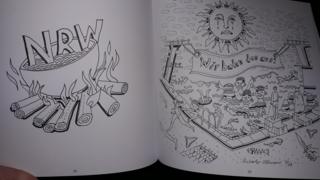 A group of far-right politicians is being investigated by police in western Germany over allegations that they distributed a racist colouring book.

A regional group for the Alternative for Germany (AfD) party allegedly handed out the books at an event in the state of North Rhine-Westphalia.

Police said the group had been accused of sedition (incitement).

Prosecutors and the state’s parliament are also reportedly looking into the matter.

However, the AfD parliamentary group dismissed criticism of the book as an “attack on the freedom of art and satire”.

The AfD, Germany’s largest opposition party, has grown in popularity in recent years but has been condemned for its extreme views on immigration, freedom of speech and the press.

The book appears to show caricatures of men brandishing guns under a Turkish flag and women wearing headscarves in a swimming pool.

In one illustration, a knife can be seen pointing menacingly towards people in a swimming pool.

Titled “North Rhine-Westphalia for colouring in”, the book was allegedly given out at an AfD event in the city of Krefeld last weekend.

An activist who attended the event to protest against the AfD told the BBC he was shocked by the contents of the book.

The person, who did not wish to be named, said the book was akin to “fascist propaganda”.

The AfD parliamentary group described it as an “art book with satirical sketches on the situation in the country”.

But politicians from other parties in the state condemned the book as racist. Thomas Kutschaty of the Social Democratic Party (SDP) accused the AfD of inciting children “with its inhuman ideology”.

On Wednesday, the state parliament said it would check whether the AfD had used funds improperly to distribute the book, according to German newspaper Westdeutsche Zeitung.

What is the AfD and why is it controversial?

The anti-immigration and anti-Islam AfD has MPs in all 16 of Germany’s state parliaments.

Nationally, the AfD has 89 seats in the lower house of parliament (Bundestag), out of 709 in total, making it the largest opposition party.

It is considered to be stronger in ex-communist eastern Germany than in western states like North Rhine-Westphalia.

The party was at the centre of a political crisis in the eastern state of Thuringia earlier this month.

Liberal leader Thomas Kemmerich was elected as state premier with the help of the AfD, prompting national outrage.

The vote was described as a political earthquake as it was the first time the AfD had helped to form a state government in Germany, breaking a consensus among the main parties never to work with extremist parties.