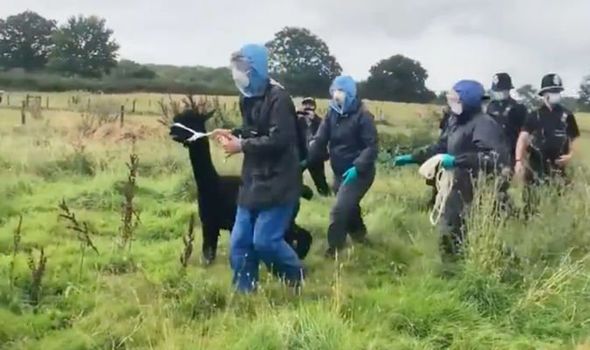 The alpaca was the centre of a years-long row after migrating to the UK from New Zealand, after testing positive for bovine tuberculosis upon arrival in Britain. On August 31, Geronimo was killed by the Animal and Plant Health Agency (APHA).

Mr Plant added: “It’s not conclusive proof he was BTB-free – a lab will now look for signs of the disease in cells, a process which could take weeks more.”

Darshna Soni, Channel 4 home affairs correspondent, also posted on Twitter: “Reports that there is no sign of bovine TB in the initial post mortem of Geronimo the alpaca.”

She also added the results were “not conclusive”, but if Geronimo is confirmed to not have Bovine TB “lots of questions for Defra” will be asked.

It comes after Helen Macdonald, 50 and Geronimo’s owner, vowed to posthumously prove the alpaca was not infected with Bovine TB.

She said she hopes to emulate a fellow alpaca farmer who managed to sneak the blood samples of a slaughtered animal through the government testing regime to prove they should not have been culled.

She added: “We have got blood samples and we will get them tested after Christmas.

“They have made a martyr of him now and I am not going to let this go.”

In a statement in August, the Government said Geronimo was “euthanised” by staff from the APHA as a “necessary measure to control the spread of bovine tuberculosis (bTB)”.

At about 11am on August 31, a team of four vets from the Department for Environment, Food and Rural Affairs (Defra), dressed in protective overalls and supported by at least 10 police officers, led the camelid by rope into a horsebox.

They then drove him to an undisclosed location where he was killed.

Defra said at the time a postmortem examination would be carried out by veterinary pathologists from the APHA, followed by a bacteriological culture of selected tissue samples, which can take up to three months to process.

Christine Middlemiss, chief veterinary officer, said: “No one wants to have to cull infected animals if it can be avoided, but we need to follow the scientific evidence and cull animals that have tested positive for bTB to minimise spread of this insidious disease and ultimately eradicate the biggest threat to animal health in this country.”