England’s Lionesses roared to victory in a Euros win that clawed back years of negative attitudes towards women’s football.

The triumph has been likened to the sport reaching base camp in terms of its progression, with even higher summits well within reach for the coming years.

Thoughts are now turning to how the Euros success can be harnessed and directed toward a new generation of footballers.

Sunday’s 2-1 win against Germany has also encouraged people to look to the past – and to the trailblazers throughout history that refused to play ball with societal norms.

Until this week, many people in the UK were unaware a ban on women’s football had been in place until 1971.

People of both genders have been having kickabouts since the 16th century – there are early records of mixed games in Scotland’s East Lothian – when the major issue was simply over if people were ignoring the Sabbath to play football.

It wasn’t until centuries later that women were specifically banned from playing due to their gender.

The shocking decision came after teams successfully sold out stadiums throughout the First World War and raised eyewatering amounts of money for the war effort. 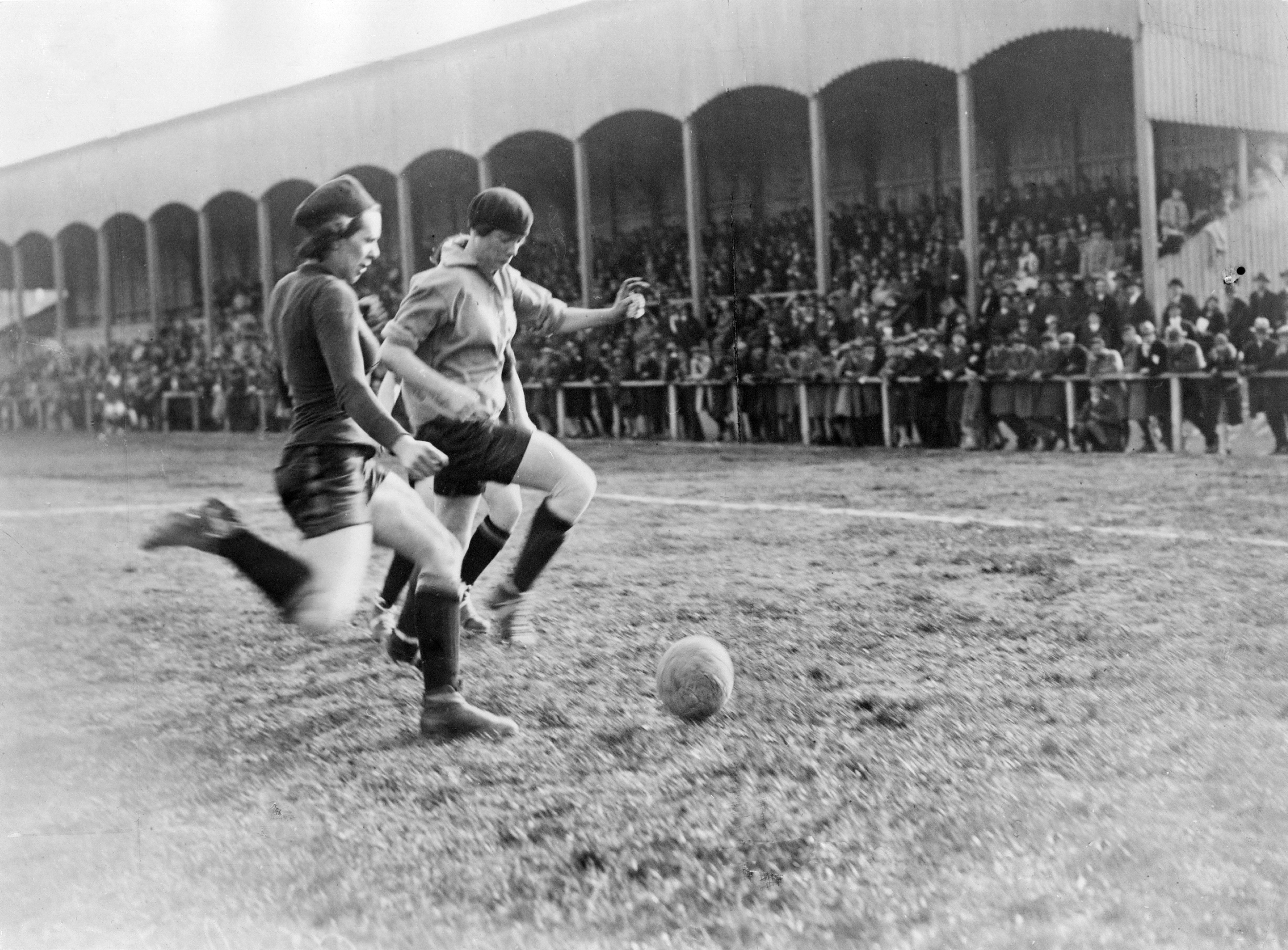 The Football Association (FA) on December 5, 1921 had acknowledged ‘complaints’ made against the women’s game during a meeting.
It was ruled the sport was ‘quite unsuitable for females and ought not to be encouraged’.

Women playing football were seen as an ‘infection’ which needed to be ‘dealt with’ where possible, explained historian Steve Bolton.

His grandmother was none other than Lizzy Ashcroft, one of the most popular footballers in the 1920s and 30s.

She played for Dick, Kerr Ladies – a Preston-based team that was hugely influential in the changing face of women’s football.

Growing up, Steve had been unaware of her legacy until stumbling upon a series of photos in his father’s attic.

‘She was rough, had a broad Lancashire accent and her old cardigan was held together by a safety pin,’ he recalled to Metro.co.uk.

‘What I remember most is a grizzled old lady. I knew she played football, but not much else.’

Working alongside former footballer Gail Newsham, Steve soon got to work investigating the history of his granny’s team that seemed to have been wiped from history.

He now works to research women’s teams and players from across the UK’s past.

‘These fierce woman went through two world wars, a recession and brought up families, they were a formidable bunch,’ Steve said.

‘But when the FA ruled football was unsuitable for females, this misogyny echoed down for centuries.’

Seeing the Lionesses win, and thinking of the joy his grandmother would have felt, felt like a ‘fairytale come true’ for Steve.

‘Complaints having been made as to football being played by women, Council felt impelled to express the strong opinion that the game of football is quite unsuitable for females and should not be encouraged. Complaints have also been made as to the conditions under which some of the matches have been arranged and played, and the appropriation of receipts to other than charitable objects. The Council are further of the opinion that an excessive proportion of the receipts are absorbed in expenses and an inadequate percentage devoted to charitable objects.’

‘We girls play football in a proper spirit. We do not retaliate if we are bowled over, and we show no fits of temper. We are all simply amazed at the action of the authorities in placing a ban upon the sport we love with all our heart. Surely to goodness we have the right to play any game we think fit without interference from the Football Association! We are all working girls dependent upon our weekly wages and living with our parents and others partly dependent upon us.‘

Countless trailblazing players like Lizzy Ashcroft defied the FA’s ban and played their own matches and tournaments.

They weren’t swayed by bad press, had become accustomed to pitch invasions from protesters and shrugged off the general disapproval of society where they could.

Dick, Kerr Ladies – known as the ‘Lost Lionesses’ – even took their game to an unsanctioned Women’s World Cup in Mexico 1971.

A handful of years later Rose Reilly, one of the greatest players to emerge from Scotland, would travel to France, then Italy due to the lack of opportunities on her home soil.

Abroad, the Ayrshire-born striker received plaudits and accolades that were simply impossible back in Great Britain.

Various football players – Helen Graham Matthews, Elsie Cook and Nettie Honeyball to name but a few – have today been near forgotten.

But dedicated researchers, writers and academics up and down the country are working hard to rewrite them into the history books.

Dr Fiona Skillen is based at Glasgow Caledonian University and is an expert in women’s sport.

She’s currently at work on a project, funded by FIFA, that looks at the development of women’s football from the 1880s right until the outbreak of the First World War.

Like Steve, watching the final on Sunday was nothing short of a dream come true for the academic.

She told Metro.co.uk: ‘What was so inspiring was the number was the number of times the media reflected back about the difficult the journey had been for the sport.’

Early into her exploration of women’s football, she realised there was very little archived material.

The lack of research was what encouraged Fiona to delve into newspaper records and share her findings with the world.

‘During the war, it had been patriotic to watch the women play – that’s how they circumnavigated the backlash.

‘But people were still willing to fight for opportunities after the ban.

‘Off the back of the Lionesses successes, we hope people can take the time to find out more about the ban and their own family – and any connection they may have had.’

She’s helped countless people trace their family routes through football ,including Scottish singer Eddi Reader – lead singer with the band Fairground Attraction that stormed to success with Perfect back in 1988.

The singer’s grandmother, Sadie Smith, was a footballer for the esteemed Rutherglen Ladies.

Sadie was known as ‘the female Alan Morton’ as her talent was likened to the Glasgow-born left winger who became famous while playing for both Rangers and Scotland.

‘Eddi’s grandma should be a celebrity in her own right!’ added Fiona.
Off the back of the Lionesses’ success, it is hoped the thousands of young girls watching from home, or from in Wembley, will be inspired to play football.

Writers such as Eve Ainsworth are ensuring that future Lionesses, as well as new players from up and down the country, remember the important players who came before them.

Her books – such as ‘Kicking Off’ and ‘All to Play For’ – span women’s football throughout history.

She grew up in a football loving family but never took part in the sport herself, it wasn’t the done thing.

She told Metro.co.uk: ‘It was always in the back of my mind that football was not for girls. And the early feminist in me always hated that, there was always a part of me that questioned that.’

Eve worked alongside academics and historians to ensure her depictions of groundbreaking players such as Lily Parr – ‘one of the most talented players women’s football has ever seen’ – were true to real life.

The writer watched the Euro’s final with her husband and son. She felt a mixture of sheer joy but also frustration on what could have been for the decades of players who laid the trail for the Lionesses, but never got the chance to walk it themselves.

‘These women were treated so shoddily by the FA, it was clear they [the FA] felt threatened.

‘Where would we be now if that ban hadn’t happened and women had been allowed to play? There is that frustration.

‘But the tide is turning with young people now. It’s now about how we keep going make sure girls get proper support we need to keep this amazing momentum going.’

The Euros win of Sunday has indeed led to a wave of new online followers for many of those who have long since been campaigning to raise awareness of women’s football.

In moving forward, the lost potential of the past can never be forgotten.

Former England footballer turned pundit Alex Scott and presenter Gabby Logan, overflowing with emotion during Sunday’s win made sure to remind millions of viewers of the state of play just two years before – let alone pre-ban.

‘Let’s just remind ourselves as well, back in 2018, we were begging people to host in their stadiums a women’s game for this Euro’s,’ said Alex. during the coverage.

She added: ‘So many people said no, I hope you are all looking at yourselves right now because you weren’t brave enough to see at what it could have been.’

As the Lionesses took Wembley by storm – as record breaking numbers watched on – they launched a new era of not only in women’s sport, but also in Britain’s history as a while.

As the confetti rained over the pitch, Gabby added: ‘The Lionesses have brought football home. Now it’s down to the rest of us to make sure it stays here. You think it’s all over? It’s only just begun.’