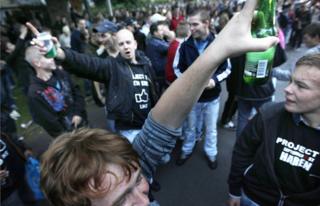 It began as a Snapchat message from a 15-year-old girl to all her friends to come to her birthday party on Friday in the small Dutch town of Katwijk.

But her plans turned into a nightmare when one of them posted the invite on Facebook and prompted interest from thousands of people nationwide.

The mayor said the party was hijacked. The girl has reportedly gone into hiding – and her party is cancelled.

Police feared a repeat of a Dutch party that went viral and ended in rioting.

Crowds of up to 4,000 people had to be broken up by riot police in September 2012, when a girl shared an invitation to her 16th birthday party in the northern town of Haren, but set the event on Facebook to public.

The party was dubbed Project X Haren, after a Hollywood comedy about a party that spirals out of control.

How girl’s party was ‘hijacked’

It started out as a message on Snapchat.

“Friday party at my place, everyone welcome. If you’re coming, please let me know and who you’re bringing.”

Somehow the teenager’s message ended up on Facebook as “Party! In Katwijk”. Messages were also shared on WhatsApp groups.

Her uncle Marcel told local TV that the girl had nothing to do with it and that one of her friends had decided that the invitation should go viral.

Katwijk has only a few hundred residents, so when more than 8,000 people said they planned to come and another 20,000 expressed interest, police and local officials decided to act.

According to Wim Hillenaar, the mayor of the local area in the southern province of Brabant, the girl’s message was “hijacked” by unknown people.

The local authority and police were now prepared for every scenario, he said in a statement (in Dutch). “Our line on this now is there is not a party in Katwijk and there won’t be any party in Katwijk,” he said, adding that anyone coming on Friday with the wrong intentions would be stopped.

What’s happened to the girl?

The girl’s uncle said she had gone into hiding.

“It’s a bit of a rollercoaster right now,” he told Omroep Brabant TV. “My niece has been moved out of the house and she’s being put up somewhere else.”

“This appears to have gone completely off the rails,” said the uncle.