BERLIN — To Germans, the 41st president of the United States, George Bush, was the man who helped ensure the peaceful reunification of their country. To Mikhail Gorbachev, former leader of the Soviet Union, he exemplified great kindness. To many Kuwaitis, he was a hero, lauded for the 100-hour ground war that routed Iraqi forces from their country.

On Saturday, as former and current leaders around the globe learned of Mr. Bush’s death at 94 on Friday night, their condolences were steeped in praise for the depth of his abilities as a statesman and his refusal to grandstand — a point that commentators noted was in sharp contrast to the tone of the current administration.

“Germany owes a lot to George H.W. Bush,” Chancellor Angela Merkel wrote in a telegram to President Trump. “It was a stroke of luck in German history that he was at the head of the United States of America when the Cold War came to an end and Germany’s reunification became possible.”

Ms. Merkel praised Mr. Bush for recognizing “the significance of this historical hour” and giving Germans “his trust and support.”

“The courageous and peaceful revolution of the people to the east of the Iron Curtain thus met with the courage and skill of a statesman who, together with others, led Europe and the trans-Atlantic partnership through this upheaval, ushering in a new era,” she wrote.

Mr. Bush, often criticized at home for his measured response to the fall of the Iron Curtain, was praised for that very quality abroad. His calm, controlled response to the end of communism in Europe earned him respect on the Continent as a senior statesman, despite his decisions to send United States troops into Panama and to launch the 1991 Persian Gulf war.

Mikhail Gorbachev, the former president of the Soviet Union, underscored Mr. Bush’s skillful negotiation among the former adversaries of the Cold War.

“We had a chance to work together during the years of tremendous changes. It was a dramatic time that demanded great responsibility from everyone,” he told the Interfax news agency. “The result was an end to the Cold War and the nuclear arms race.”

Mr. Gorbachev said Mr. Bush “was a true partner” at the diplomatic table, but above all one who showed kindness to him and to his wife, Raisa.

One example of Mr. Bush’s approach: On the morning of Nov. 10, 1989, as news reached Washington that the Berlin Wall had fallen peacefully the previous night, Mr. Bush called Chancellor Helmut Kohl of Germany to wish him “lots of luck.”

Historians have noted that while Ronald Reagan gets the credit for urging Mr. Gorbachev to “tear down that wall,” it was Mr. Bush who later succeeded in persuading the Russian leader, as well as President François Mitterrand of France and the deeply skeptical Prime Minister Margaret Thatcher of Britain, to allow the two German nations to reunite.

“I will never forget the role he played in making Europe a safer and more united place following the fall of the Berlin Wall and the Iron Curtain,” said Jean-Claude Juncker, president of the European Commission. 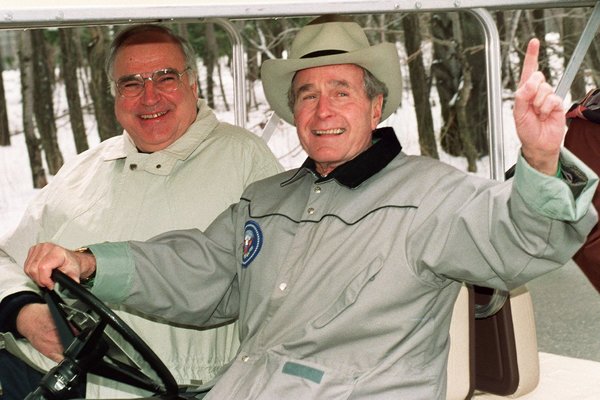 “President Bush’s calmness, leadership and close personal relationships with Helmut Kohl and Mikhail Gorbachev were decisive in restoring peace and freedom back to so many people across our continent,” Mr. Juncker said in a statement. “We Europeans will forever remember this.”

In 2005, at a ceremony held at the Point Alpha Memorial in central Germany, Mr. Kohl, who died in 2017, Mr. Bush and Mr. Gorbachev gathered to accept an award honoring the role they had played at a decisive time in history for Europe and the world at large. Sitting together on stage, Mr. Kohl needled the former American president about his response to Mrs. Thatcher’s biting remark that “two Germanys are better than one.”

“She didn’t let you get a word in edgewise, eh, George,” the former German chancellor joked, and the three erupted in laughter.

But in the tense months of 1989 and 1990, during the collapse of the communist system that had controlled Eastern Europe for decades, the situation was delicate and demanded a leader in Washington who understood that it was not the moment to declare victory — despite domestic criticism that his response had not been forceful enough.

“As the two blocs faltered and the decades-long confrontation began to break down, George H.W. Bush seized the courageous chance to end the Cold War,” Germany’s foreign minister, Heiko Maas, wrote on Twitter. “We mourn a great statesman and a friend of Germany.”

The former Polish president and leader of the Solidarity labor movement that helped to bring down communism in his country, Lech Walesa, posted a picture on Twitter of himself standing arm in arm with Mr. Bush, their hands raised in “V” signs of victory. He, too, thanked Mr. Bush for his role in ending the Cold War.

“He was the only one of the world leaders who at the time did much to bring down communism and help Poland,” Mr. Walesa said. “It will remain forever in the hearts and memory.”

President Emmanuel Macron of France expressed his condolences to Mr. Bush’s family in a message on Twitter, mourning a “great leader who strongly supported the alliance with Europe.”

President Vladimir V. Putin of Russia addressed his condolences directly to a son of Mr. Bush, former President George W. Bush, recalling his father as “an exceptional person who served his land for his whole life.” The elder Mr. Bush “showed political wisdom and foresight, strived to make balanced decisions even in the most challenging situations,” the Russian president said.

In the Middle East, Mr. Bush’s legacy was more nuanced, given his decision to end the war after 100 hours that pushed the Iraqi Army out of Kuwait but left Saddam Hussein in power.

Kuwait’s emir, Sheikh Sabah al-Ahmad al-Sabah, praised the “historic stands and support” that Mr. Bush showed to his country and “his pivotal role in forming an international coalition, mandated by the U.N. to liberate the state of Kuwait” after the invasion by Iraq in 1990, the Kuna news agency said.

The ruler of Dubai, in the United Arab Emirates, Sheikh Mohammed bin Rashid al-Maktoum, said Emiratis remembered him as a “firm ally and friend.”

John Major, who succeeded Mrs. Thatcher as prime minister of Britain in 1990, summed up the core of what many appreciated about Mr. Bush: He “saw America’s obligation to the world and honored it,” Mr. Major said.

“I feel privileged to have worked with him, and even more privileged that he became a lifelong friend,” Mr. Major told The Associated Press. “He was, quite simply, one of the most deep-down decent people I have ever known.”

Reporting was contributed by Sophia Kishkovsky from Moscow, Joanna Berendt from Warsaw, Declan Walsh from Cairo, Choe Sang-Hun from Seoul, Korea, and Palko Karasz from London.