Hours after sitting at his mother’s bedside as she passed away at Balmoral, grieving Charles was thrust firmly back into the spotlight. He and Camilla, now Queen, flew back from Aberdeen to meet their subjects for the first time.

They put on brave faces for the well-wishers outside Buckingham Palace. Some were crying while others were cheering.

Charles was greeted by kisses and shouts of “God save the King” as he shook hands with members of the public and scanned the ­gathering mass of flowers outside the gates.

Vicky Binley, 51, from Rutland, spoke to the monarch before he entered the Palace for the first time as King, kissing his hands on the spur of the moment.

The royal couple arrived in a Rolls-Royce, stopping at the Palace gates and immediately headed towards the crowds outside.

Camilla, dressed in a black Fiona Clare dress and coat, looked distraught at times. Red-eyed and hollow-cheeked, she wept as she greeted well-wishers, clearly bereft.

But the King, wearing a black suit and tie, was a picture of composure.

From the Palace’s point of view, the change in reign is as much about presenting the new King to his people as it is about mourning the loss of his mother. So scenes such as this were always part of the bigger plan.

The King was surrounded by police bodyguards and Clarence House staff, including his equerry and the Earl of Rosslyn, his Master of the Household.

He was also accompanied by his private secretary, Sir Clive Alderton. He must have shaken hundreds of hands along the length of the Palace forecourt.

“We wish you success,” one person shouted, while another said: “Thank you Charles, God bless you.” 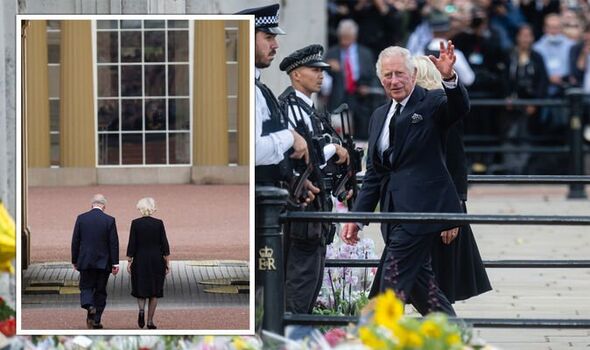 Another woman grabbed his arm and said: “Good luck my darling, you are a good man.” The King, determined to meet as many ­people as possible, could be heard saying: “We have wonderful memories.”

One well-wisher told him: “We love you Charles and we loved your mum,” amid claps and cheers in the crowd.

Camilla spoke to others but very few called her Your Majesty. Seeing her distress, however, they shouted our their encouragement and condolences: “We love you Camilla, we are so sorry for your loss.”

As the King reached the end of the line after a 15-minute walkabout a shout of “Three cheers for the King, hip hip hooray,” echoed across the street.

The King turned and looked for his wife, who soon caught up with him, still weeping, and they walked together the length of the front of the palace to view the floral tributes and gifts that had been left.

In one touching moment Charles put his arm around his wife.

They stopped at a flag bearing a picture of the late Queen, speaking quietly to each other, before finally walking through the opened wrought iron black gates and then under the arch into the Palace quadrangle.

As they did, they were saluted by Acting Chief Inspector Victoria Kneale, who was in charge of the police operation.

The No 7 Company Coldstream Guards provided a bugle salute. They had vanished from sight, but the memories lived on.

Visitor Emma Spreckley, 43, had travelled with her friend Jacqueline Southwick, 55, from their homes in Mitcham, south London.

She was sympathetic to the grieving King. She said: “He looked a bit shocked, I suppose he is, as it’s your mum at the end of the day.

“And now he’s here shaking people’s hands and trying to, I suppose, get through it as best he can.”

In reference to the thousands there to pay their respects to the late Queen, Jacqueline added “Seeing all this, he’s got the support of the nation.”

Film director Raynald Leconte, 47, from New York, said he was lucky enough to speak to the King and Queen outside Buckingham Palace.

Desley Jones, 52, and her husband Steven, 53, from north Wales, had been there for three hours. She said: “We told the King that we were so sorry for his loss and he thanked us.”

Sarah Styles from Northern Ireland said she told him: “Bless you and we love you.”

The 57-year-old added: “I just felt I really needed to come down and pay my respects to the Queen and tell him that he is loved and supported.” 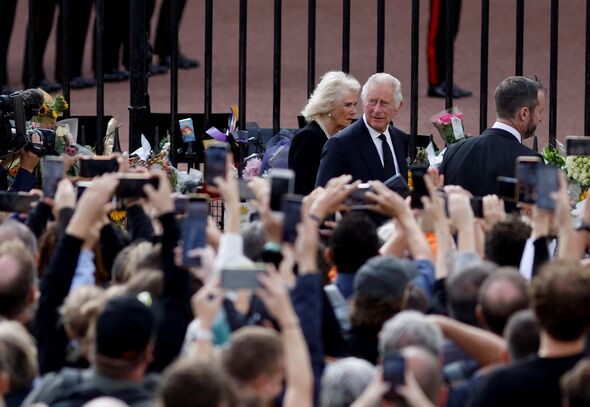 They are the living, breathing embodiment of the Britain she had nurtured for 70 years, seven months and two days, writes Cyril Dixon at Buckingham Palace. Her Majesty’s colourful, diverse and respectful admirers came in their tens of thousands to say ‘thank you’.

Every age, gender, class, colour and creed formed an orderly queue to pay respects at the gates of Buckingham Palace.

Overlooked by the balcony their Queen had graced so often, they hung a curtain of floral tributes and messages on the railings.

With rain between occasional sunshine, well-wishers were adamant their 40-minute wait to file around the Palace perimeter wall was a duty they had to fulfil.

Lauren Bailey, 26, from Chelsea in west London, said: “She almost felt like a grandma to us all. She just seemed so timeless. You just thought she would be with us for ever.

“Even though she is not, she will be in our hearts. To me, she was what made being British so special and I find this magical.”

Lynnette Oldham, 64, on holiday with husband Kevin from Auckland in New Zealand, said: “She was so gracious, she has just been such an amazing leader of the Commonwealth. “

She said: “The Queen was the most magnificent woman in history. She was incredible and I wanted my son to be a part of it.”

After King Charles greeted some of those gathered outside the Palace, Pat Jolly, 76, from Canning Town in east London, said: “It’s great and so lovely, the King having a little walk about and meeting everyone.”