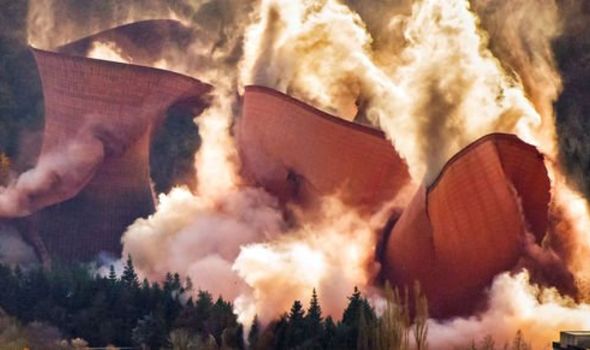 In an operation costing £10million, the 400ft high concrete towers collapsed in four seconds in a cloud of dust yesterday morning.

Crowds massed near Ironbridge in Shropshire to watch the towers come down while millions more watched the demolition streamed live online.

The power station helped to provide Britain with energy for 46 years and became an imposing feature at the heart of Ironbridge Gorge. Originally a coal-burning power station, it closed in 2015. The 350-acre site will make way for 1,000 new homes, as well as leisure facilities, a school and a range of industrial units.

Former Ironbridge power station worker Andy Holden, of Shrewsbury, was invited to watch the demolition but declined. He said: “I spent nearly 40 years maintaining the place, running the place, looking after it, doing my job as best that I could. I don’t want to be part of the demolition.

“The power station has been part of my life. It’s helped me raise my children and it’s helped me pay off my mortgage. It’s gone now and I do miss the place.” Operations manager Shaun Hockley said: “We’ve been working on the project regarding drilling the towers and preparing the towers for five months. The project overall should take in the region of about 12 years to complete.

“From doing the demolition work to the housing development and industrial units – it’s a large project.”