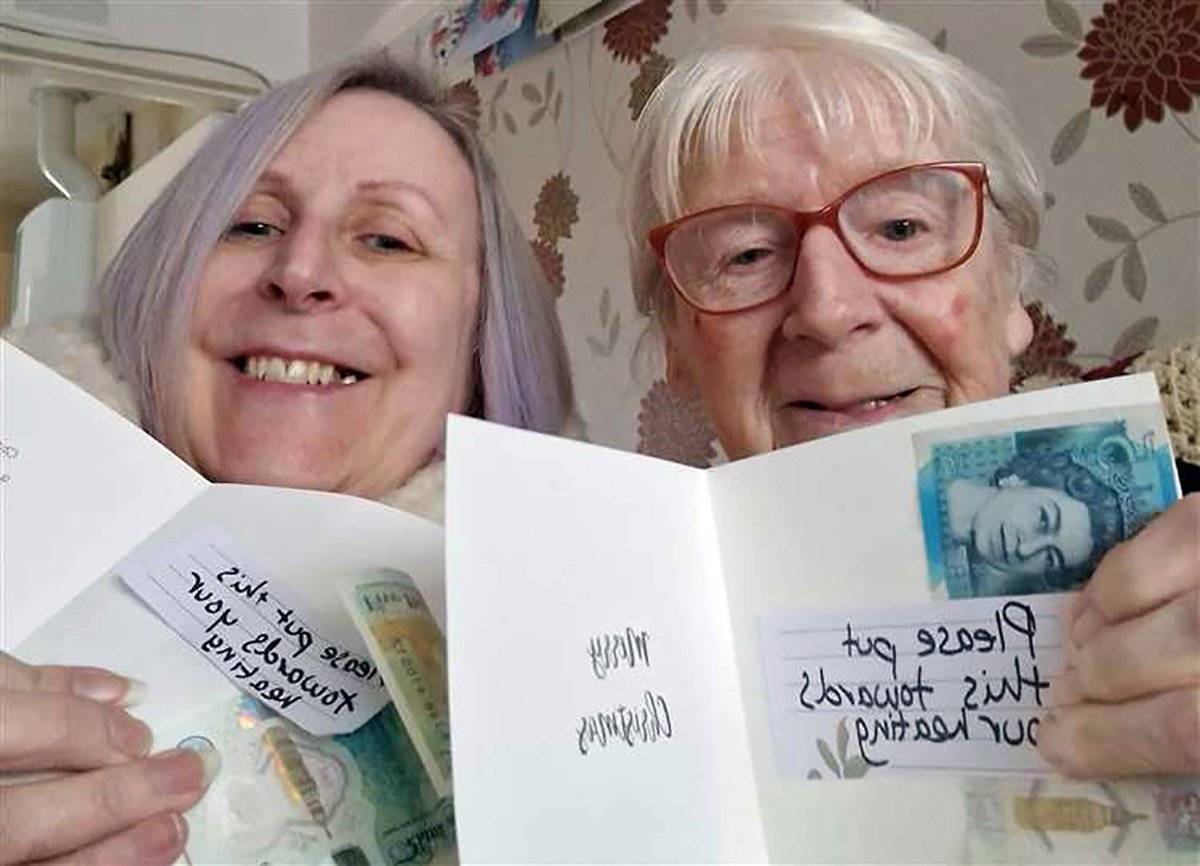 A mystery benefactor has delighted residents after posting cash through their doors containing a fiver each to help with their energy bills.

People living on a street in Chatham, Kent, were left shocked by the incredible act of kindness.

Maxine Parker-Gallagher was among those overjoyed at the thoughtful gift.

The 58-year-old said: ‘Yesterday evening there was a card put through the letterbox and I went to pull it out and saw that it was blank on the front and I thought that was strange.

‘I opened it up and inside it had that little message and it just blew me away – I thought it was just so kind.’

Maxine, who is in a wheelchair 70% of the time, lives in a small close of eight houses.

Each property is home to disabled and elderly residents.

After Maxine opened the card she called her friend who lives a few doors down – and realised the mystery money had been dispersed down the entire street.

She continued: ‘My friend had seen him come through her gate and he had a little stack of cards and he was going round and popping them all in the letterboxes.

‘She’d never seen him before, because we do live in this little community everybody knows everybody and when somebody different comes in to the close everybody notices.’

One of her neighbours said the mystery man looked like he was in his late 20s or early 30s.

Maxine added: ‘I just think it’s amazing and it’s such a small thing but it’s made everybody smile.

‘With everything that’s going on with all the death and destruction in the world it’s just a glimmer of kindness and hope. I thought it was lovely.

‘We have no idea who he is so we can’t thank him, but it just proves that there’s some lovely, kind people out there.’

Joan Green, who also lives in the area, couldn’t figure out where it had come from when she opened up the festive card.

The 92-year-old said: ‘I got hold of it and there was no name on the envelope and I thought ‘where’s this from’ and I opened it and I saw the fiver.

‘It was very good of them, whoever thought of it. It helps out a lot with the way it’s going with the electricity and gas.’

In April, household energy bills increased by 54 per cent, leaving many struggling to make ends meet.

With bills continuing to soar and the cold weather hitting the UK, small acts of kindness like these can go a long way.