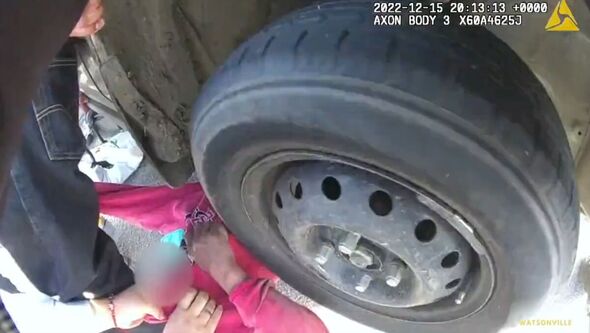 Heroic Good Samaritans answered the call when police offices asked for help lifting a stolen car off a cyclist trapped underneath. The life-and-death drama unfolded when police from the Watsonville Police Department, near Santa Cruz, California, attempted to aprehend someone driving a stolen vehicle.

The driver of the car fled the scene leaving the moving saloon careering towards a 65-year-old cyclist who was then trapped under the wheels and pinned to the ground.

Bodycam footage from the attending police officers shows a group of men responding the call for help before everyone gathers around the car and begins to lift. A jack can also be seen on camera but attempts to raise it with that only had failed.

Watsonville Police Department shared a video of the incident on their Twitter page and the footage begins with an officer shouting loudly “help, help, help” as five or six men race over to assist.

One of the Good Samaritans Marvin Luna said: “I was inbetween two officers and I just grabbed hold of what I could and I noticed everybody else was trying to lift the vehicle.”

As the video continues a policeman can be heard shouting “lift, lift, lift” as the combined strength of those helping starts to move the heavy automobile.

Corporal Isaak Rodriguez recalled that time was of the essence in ensuring the man under the car was removed as quickly as possible, he said: “I was thinking that we have seconds because this individual is going to die if we don’t lift the car off his chest, seconds matter.

“He was gasping for air, he couldn’t breath.”

Off camera an officer orders “one, two, three” as a countdown and all the men grunt from the effort as the cyclist is finally freed and pulled away from the car.

Watsonville Police reported that the suspect who fled the scene was chased down by officers and later taken to the Santa Cruz County Jail.

Cpl. Rodriguez continued: “Knowing that there are still people out there that are willing to help out a stranger in a time of need, it’s one of the greatest feelings I ever felt.”

Marvin Luna said it was something he will never forget, he said: “Everything just happened so fast, the only thing I really wanted to do was help.

“I came back to work and I told my co-workers ‘you’re not gonna believe it’. This was one of the craziest lunches I’ve ever had!”

This incident occurred on December 15th.