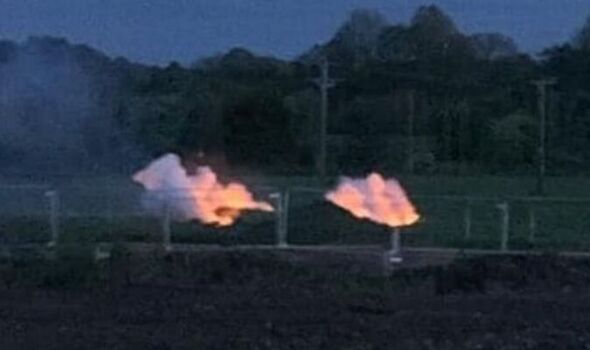 Residents in Blackrod, Bolton, witnessed a “huge” flash of light at around 9.40pm on Wednesday, while others heard an “explosion”, causing fire crews to rush to a grassed area near to Rotherhead Close. Fire engines from Horwich and Bolton stations attended, as well as engineers from Electricity North West. Horwich and Blackrod councillor David Grant shared a picture of the blaze on his Facebook page and warned fire crews were clearing the area.

He wrote: “There has been an explosion where they are clearing the area.

“Fire brigade are on the way. Appears to be in the area behind Rotherhead/Station Road.”

More than 2,000 home owners experienced a temporary power cut at around the same time this happened.

Footage taken from a nearby doorbell shows a large flash of light which can be seen coming and going within a second.

This again happened at the same time the reported explosion was heard.

Greater Manchester Fire and Rescue Service said it was called to Blackrod to reports of a power cable collapsing, triggering a power cut.

Firefighters from Horwich and Bolton stations, along with Electricity North West, were in attendance for around an hour.

A spokesperson said: “At 21:40pm today (11 May), firefighters were called to Blackrod in Bolton to reports of a power cable coming down, causing a power cut.

“Crews worked alongside Electricity North West, and were in attendance for around an hour.”

But in a bizarre twist, Electricity North West said it responded to reports of a power cut that had been caused by a goose colliding with and causing damage to an overhead power line.

Power was restored to all but three business properties within just a few minutes.

DON’T MISS
Super-rare pink pigeon stuns woman as it lands in Lancashire garden [PICTURES]
Family of six sleeping in one room in flat infested with mice [REPORT]
What are you waiting for?!’ Sunak grilled over delays to tackle crisis [VIDEO]

A spokesperson added: “Yesterday evening at 9:39pm, we received reports of a power cut affecting 2,209 properties in the Blackrod area after a goose collided with and damaged an overhead power line.

“Using our automatic restoration systems, we were able to restore power to all but three properties in the area within three minutes.

“We’re in constant communication with the remaining three businesses that remain without power.

“We will restore as quickly and as safely as possible.”