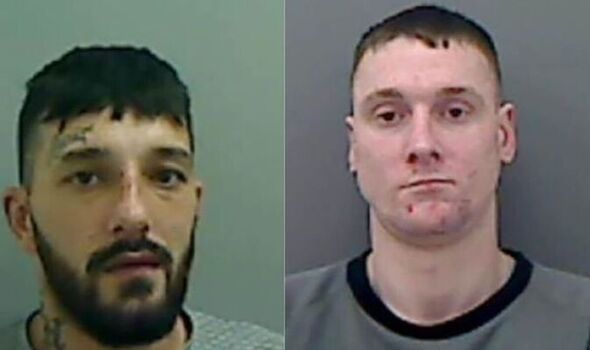 A pensioner woke to a knife being held to her throat in terrifying raid planned between balaclava-clad crooks and her own granddaughter.

The youngster, a girl, who can’t be named for legal reasons, told crook Adam Kirby, 34, that she was being “badly treated and that money was being taken from her” – then showed him and his criminal friend Sean Hamilton, 32, where her grandmother lived in a bid to carry out a “revenge” crime.

A court heard Hamilton and Kirby got inside the house and appeared at the end of the OAP’s bed wearing balaclavas at 1.21am on October 21, last year. They held a knife to the horrified grandmother’s throat as they stole two cash tins containing £800 to £900.

Annelise Haugstad, prosecuting, told the court the two men tied the girl’s hands up with cable ties and left her outside the house as they also stole an iphone, a leather purse and two pairs of brand-new Ugg boots.

Ms Haugstad said after the men left, “the girl began knocking at the door, her hands still tied, saying that the men had done this to her” as if she too was a victim of the robbery.

“This was a revenge attack,” Ms Haugstad continued.

The police were called and their investigations uncovered CCTV of the girl and the two men making their way to the house. The girl later pleaded guilty to robbery and was handed a community order in the youth court, reports Teesside Live.

Kirby’s DNA was found on the grandmother’s handbag and a police officer recognised Hamilton from the CCTV footage. In a statement, the grandmother said that she’d lived in the area for a long time and that she was “sickened” by what had happened.

Hamilton, of Dunston Road in Stockton, and Kirby, who gave his address at HMP Northumberland, listened to court proceedings via video link from Durham and Northumberland prison. They both pleaded guilty to robbery.

Kirby has 37 previous convictions for 97 offences; he was jailed last year for two other burglaries.

Kate Barnes, defending Hamilton, admitted that he has “an unenviable record for offending” but said that when he was released from a previous prison sentence in 2019, “he stayed out of trouble and lived a family life” until 2021.

Ms Barnes said that Hamilton relapsed into drug use after “his mother, who has dementia, had a stroke and a relative was killed in a tragic motorbike accident. He began using crack cocaine.”

Ms Barnes added that Hamilton did not know the family he had robbed from, but that he had bumped into Kirby earlier that evening and had agreed to become involved: “He was not the person brandishing the knife” she said.

Kirby’s defence barrister, Rod Hunt, said that the girl’s claims of hardship were “a pack of lies” and that his client had only gone to the house after speaking to her.

But Judge Howard Crowson said that he “would not be making any distinction. This was a joint enterprise using a knife.”

Hamilton’s partner sat in the public gallery to support him as the court heard that he had written a letter of apology to his victim.

For Kirby, Mr Hunt told the judge that he had jailed his client for four years “for his last burglary” and that the horticultural tutor from prison had written a reference for Kirby, saying that he is “the ideal learner” and that the cell-based course would help him with employment opportunities when he is released.

Kirby was then transferred to HMP Northumberland where Mr Hunt said: “He is an enhanced prisoner – he began working in the kitchens but has been promoted to the engineering workshop, fitting and making doors for the prison. It’s a trusted position, the tools he uses could at any time be used as a weapon.”

Mr Hunt added: “He has a 14-year-old son that he saw at weekends before he was taken into prison and he hopes to move away on his release. Drugs formed this truly chaotic behaviour.”

Judge Crowson told the men: “This was a serious robbery – a plan hatched with the victim’s granddaughter. It was made to look as though the granddaughter was also a victim.”

He told Hamilton that he could see that he had expressed “true remorse” but that he now cannot support his family whilst he is in custody. Addressing Kirby, the judge said, “You’ve shown remorse but I sentenced you in March for a serious burglary.”

Hamilton was jailed for seven years and four months; he was also banned from driving for three years. Kirby was handed six years.

The court heard that Hamilton had also led police on two high-speed chases through Stockton on April 15 and June 21, of last year. Both times he refused to pull over. In April, he was driving a car with false number plates and drove at 90mph in a 30mph zone.

He drove on the wrong side of the road and into traffic cones, before narrowly missing some bin men. In June, he was arrested after a police chase on foot, after he got out of his vehicle; he was then found to have taken cocaine.

Hamilton admitted dangerous driving, drug driving, driving with no insurance and driving otherwise in accordance with a licence, relating to the two other incidents. The court heard that he has 40 previous convictions for 80 offences, including the theft of a car, assaulting a police officer and the possession of an offensive weapon.