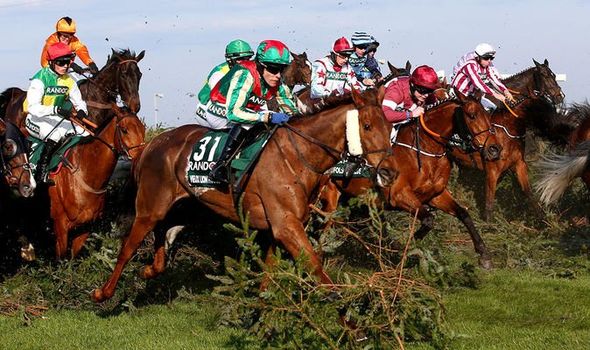 The stallion, trained by Willie Mullins, and owned by Graham Wylie, was the only horse to have died after falling in the first jump. He is the first horse to be put down since 2012. Another horse, General Principle is being treated or injuries, with vets saying the animal will survive. All the other horses are recovering after the race.

Up For Review joined a long list of other horses killed in the gruelling 5.15pm race today, which has been condemned by animal rights activists protesting outside the grounds.

Anti-horse-racing protesters, who demonstrate outside the event each year, handed out disturbing images of a horse breaking its leg in flyers that call the event “cruel”.

Animal Aid have been circulating leaflets showing horses with broken legs as a harsh reminder of the dangers racehorses face each and every time they leap over a fence.

Horses that break their legs are more often than not put down, a controversial practice in the eyes of many.

Animal Aid are actively seeking to end the Grand National and commercial racing as a whole.

Following footage showed by ITV of a repeat of the win, animal rights activists were quick to call out the broadcaster’s “cowardice” on social media.

Public speaker Paul Lewis said: “ITV shows repeat of Grand National starting at second fence to avoid having to show Up For Review dying with its legs flailing in the air at the first. Cowardice. Show what happened. Third horse to die at Aintree this year.”

The hashtag ‘You bet they die’ is currently circulating following the sad news about Up For Review.

Ricky Gervais, who is outspoke on animal rights, tweeted before the race began and asked simply: “Why would you bet on a horse’s life for fun?”