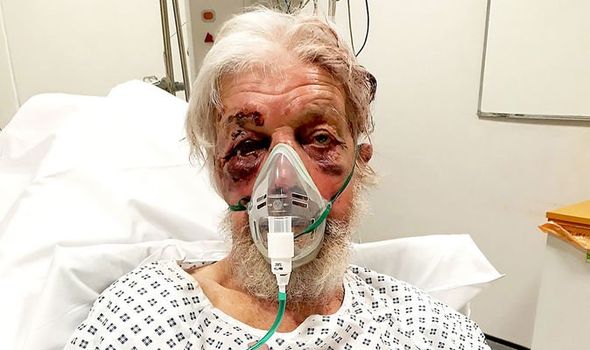 He was set on in the street after confronting a crazed driver who narrowly avoided hitting the couple as they crossed a busy road.

CCTV showed Mr Eva remonstrating with the driver of the car, which was carrying a woman and child, after the near miss.

The cowardly thug half his age then jumped out, chased after him and shoved him against a wall.

And when he slumped senseless to the ground the attacker callously drove off.

As he recovered at home yesterday retired bricklayer Mr Eva said: “I woke up lying on the pavement with paramedics running around me and they took me to the hospital. I didn’t know what was going on.

“I didn’t know who the attacker is. I think he’s a prat. I can’t think properly.

But he bravely joked: “I’m still not 100 per cent. I feel quite fragile but I’m trying to hang on to get a telegram from King William.”

The attack happened around 8pm on Easter Sunday but details of it have only just emerged. 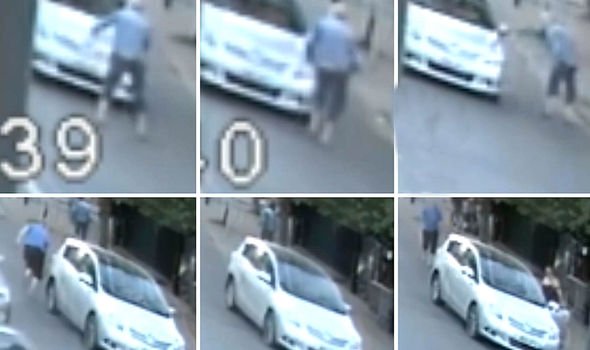 Mr Eva, who has 10 great-grandchildren, was walking home with his wife Jackie in Penge, south east London, after a barbecue to celebrate her birthday.

A silver car “abruptly stopped” as they were crossing a road, almost hitting them.

Film released by the Metropolitan Police showed Mr Eva confronting the driver by waving his hands, indicating he should slow down.

After an altercation the pensioner walked away but the suspect, wearing dark blue shorts and blue T-shirt, then pursued him.

A young couple who were on the other side of the road rushed to give first aid to Mr Eva, who lost consciousness for around two minutes.

He has no memory of the attack, only the row that led up to it.

Mr Eva said: “After he had done it, the attacker said to my wife, ‘He frightened my child’. The guy has got problems.

“I just hope this guy feels totally ashamed of himself. It was unnecessary. He may have knocked me down but he won’t keep me down. 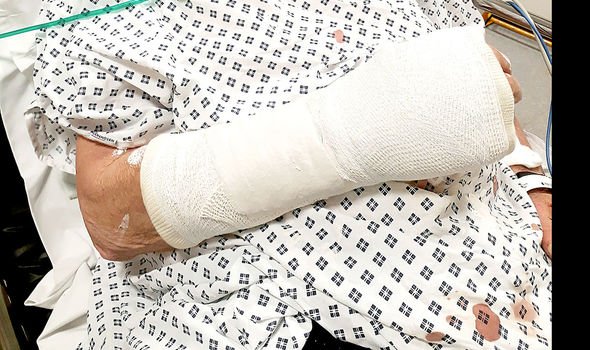 “I was in the middle of the road when he nearly hit me. Then he was right in my face. I said, ‘What’s your problem?’ I remember him glaring at me and thinking, ‘That’s it’.

“I walked away and that’s all I can remember.”

Good Samaritans Ellie-May Williams and her boyfriend Charlie Glen, both 21, rushed to help.

Healthcare worker Ellie said: “We saw that Paul was crossing the road and the driver stopped and swore at him. The attack was disgusting.”

Charlie added: “We saw the full damage to his face and it was very shocking.”

Detective Constable Luke Thomson called it “a nonsensical attack”, adding: “There is no place in society for unlawful and aggressive acts such as this.”

The driver, who is wanted on suspicion of GBH, is white, around 40, 5ft 10in to 6ft and of large build with a bald or shaved head.

Anyone with information should call Crimestoppers anonymously on 0800 555 111.