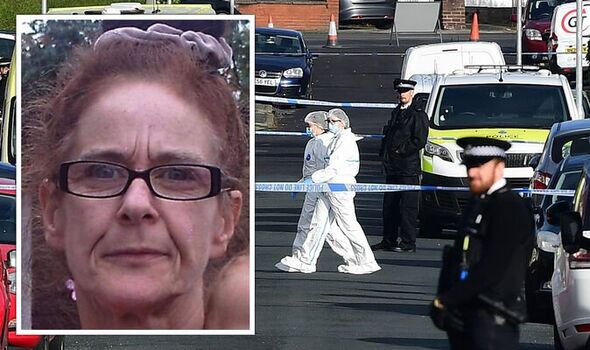 The family of a woman who was shot dead at the weekend at her home in Moreton, near Liverpool, have said they believe she was targeted by thugs. Jackie Rutter, 53, was shot in the chest in her doorway on Meadowbrook Road around 1.45am on Sunday.

Police have described the incident as a targeted attack to local news outlets.

In a statement released yesterday, Merseyside Police said that officers were called to the property following a report that the body of a woman had been found inside.

Emergency services attended, but she was sadly pronounced dead at the scene.

The force said that she was found with an injury to her chest “consistent with a gunshot wound”.

Speaking to the Liverpool Echo today, the partner of Ms Rutter’s daughter, said they believed she had been caught up in gang violence.

He said: “This is payback. It came out weeks ago that if they couldn’t get to who they wanted, they would get to her instead.

“Jackie wouldn’t hurt a fly. She was the sweetest woman you could ever meet. She only weighed five and a half stone – and they shot her point blank.”

The family relation claimed that a group of men had turned up at the house, kicked down the door and shot the grandmother of five.

He added: “To lose a parent is bad enough, but to have her stolen like this is just horrific.”

Police are now appealing to members of the public who may have any information relevant to the investigation.

The Echo reported that they are interested in a dark-coloured vehicle containing up to three individuals in the area at the time of the shooting.

It reported that officers later found the vehicle burnt out on Garden Hey Road, a short distance from Ms Rutter’s house, and are looking to trace its movements before and after the incident.

The victim of the shooting was described as being “in the prime of her life” when she was gunned down.

Her daughter’s partner remarked: “She was a loving mother; she’d do anything for anybody. She’d give you the last coin in her purse. She was the life and soul of the party. She was one in a million.

“She had her struggles. She brought her children up all alone, and this is how she’s repaid.”

He added: “As soon as we heard a woman in her 50s had been shot in Meadowbrook Road, we knew it was Jackie. We just knew.”

Merseyside Police said that a 79-year-old man, who was known to the victim, was arrested at the scene on suspicion of murder, but has since been released pending further enquiries.

Detective Superintendent Sue Coombs said: “At this time we’re appealing for witnesses in that area, anything they have seen or may have been captured on CCTV or dashcam footage, anything of that nature, to come forward to us.

“Clearly there’s no place for guns on Merseyside streets. Too often we’ve seen the devastation is causes to families and communities.

“We will do everything in our power to make sure we identify the people responsible and bring them to justice. What I would ask is that the community work with us and provide us with whatever information they can to help us with that.”

Superintendent Matt Moscrop said: “You will see a really high police presence in the area are the moment, around the scene, to engage with people, reassure people and gather information to support the investigation.”

Merseyside Police said they would not comment directly on the claims made by the family, but that a “number of lines of enquiry” were being pursued in their investigation.

Anyone with information is asked to contact Merseyside Police quoting reference number 22000796038.