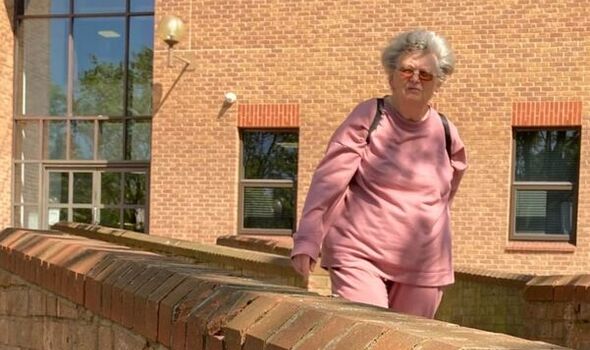 Jeanette Lee, 74, siphoned cash from frail dementia-patient Jeffrey Hewitt’s accounts to splash out on a selection of raunchy lingerie at an Ann Summers boutique. The underwear was among a bounty of goods bought by Lee after £63,430 vanished from her father’s bank accounts while he was living in a care home and unable to look after his own affairs.

Despite the huge sum police have only been able to attribute £25,000 of the missing money to the daughter’s spending bonanza.

After pleading guilty to fraud by abuse of position at Derby Crown Court the crook, sporting a pink-velour tracksuit, escaped with a suspended 18-month jail sentence.

Judge Shaun Smith QC said: “It is always sad to see any person in the dock charged with a criminal offence but you are there having reached the age of 74 and having never been in trouble before and that is even sadder. Between 2015 and 2017, you accept that you helped yourself to money you would have got anyway upon your father’s death.

“He developed dementia in 2009 and in 2015 you were appointed in charge of his affairs. What you did, did not affect the quality of his life or make things difficult for him as his income allowed him to be comfortable in the care home.

“It had no detrimental effect on him but that you were entitled to the money in due course is no reason to help yourself to his money.”

Hal Ewing, prosecuting, said Lee, of Chesterfield, said she began stealing shortly after being put in charge of her father’s affairs in 2015. He has since died.

He said the Office of Public Guardian, a Government department which helps people to stay in control of decisions about their health and finance, took her responsibility away from her and investigated the missing cash.

Mr Ewing said: “She said she used some expenditure to help her father and spent other amounts in bars and at Ann Summers.”

The defendant was also handed a four-month curfew, monitored by an electronic tag to be fitted to her wrist, confining her to her home address between 7pm and 7am each day.