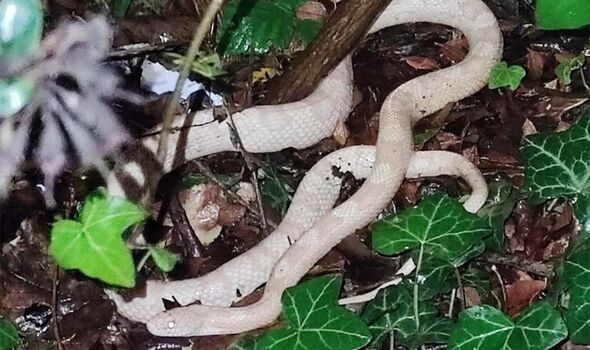 A grandmother was horrified when she accidentally picked up a two-and-a-half foot snake in her garden.

Gill Peters, from Truro, Cornwall, made the discovery earlier after mistaking the reptile for a piece of rubbish.

Speaking to CornwallLive, she said: “Three weeks ago I was coming through the gate and thought someone threw something in the garden. I left it and didn’t think anything more of it.

“I was getting ready for bingo last Friday and saw it again in the garden so thought I may as well get rid of it. I picked it up and realised it was a snake so dropped it and ran in screaming.

“I rang my daughter Shereen who said don’t be so silly. I was nearly in tears because I’m petrified of snakes. My daughter and grandson came up with my granddaughter and said show us where the snake is.

“I said under there, and they saw it and said ‘oh my god I thought you were joking’.”

The family then made a series of calls to the police, Newquay Zoo, the vet and the RSPCA. Shereen picked up the snake and put it in a box that they had pierced with air holes so the snake could breathe.

They then put out a plea on Facebook which got a response from snake experts staying nearby. They arrived and picked up the reptile, which they believed to be a corn snake, before taking it to safety.

Gill added: “They thought it was a corn snake as they can grow ever so big. But who and where did it come from? Someone in Festival Gardens said they saw it six or seven weeks ago. It must have been feeding on rats down by the river.”