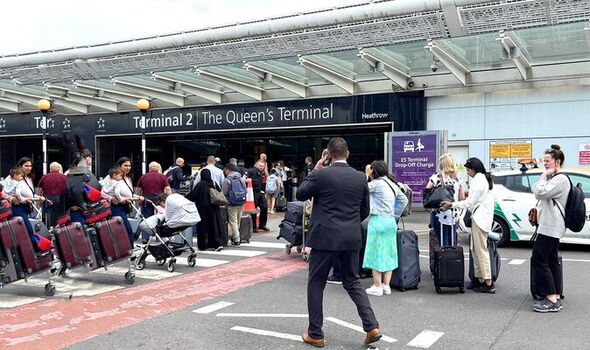 And a new passenger charter sets out a “one-stop guide”, informing them of their rights and what they can expect from airports and airlines when flying.

Last week, British Airways workers threatened to ruin hundreds of thousands of summer breaks with plans to go on strike.

Meanwhile, thousands faced “total chaos” on Thusday, when Heathrow airport axed 30 flights, saying staff could not handle them. Some passengers found out their planes were cancelled only when they arrived at the west London hub.

As the Heathrow turmoil began, Mr Shapps declared there was “no excuse for widespread disruption”.

He said: “Holidaymakers deserve certainty ahead of their first summer getaways free of travel restrictions.

“While it’s never going to be possible to avoid every single delay or cancellation, we’ve been working closely with airports and airlines to make sure they are running realistic schedules.”

He added: “The 22 measures we’ve published set out what we’re doing to support the industry.

“It’s now on airports and airlines to commit to running the flights they’ve promised, or cancel them with plenty of time to spare so we can avoid the kind of scenes we saw at Easter and half-term.

“With 100 days having passed since we set out that restrictions would be eased, there’s simply no excuse for widespread disruption.”

On Thursday, travel writer and broadcaster Andy Mossack said it was “total chaos” at Heathrow, with “zero customer service”.

Andrew Douglas had been due to be fly out on holiday, but instead “spent the last four hours in multiple queues because it’s been cancelled”.

Mr Douglas fumed: “Absolute shambles, complete chaos and only found out at check-in with no prior notification. Horrific service.”

Which? Travel editor, Rory Boland, said: “Heathrow knew how many passengers were due to fly weeks ago, meaning there was absolutely no excuse for it to be ordering on-the-day flight cancellations.

“British Airways and any airline forced to cancel journeys must inform customers of their refund and rebooking rights, including alternative flights with rival carriers, if that is the best option.”

Mr Boland called for a “desperately needed” shake-up of travel rules, which would hold airports and airlines responsible for “unacceptable disruption”.

He said: “The Government should give the Civil Aviation Authority direct fining powers so it can properly hold operators to account and drop plans to slash compensation for delayed and cancelled domestic flights.”

A BA spokesman said: “As a result of Heathrow’s requirement for all airlines to reduce their schedules, we’ve made a small number of cancellations.” The airline said it was in contact with customers to “apologise, advise them of their consumer rights and offer them alternative options, including a refund or rebooking”.

On Thursday, ex-union boss Tony Woodley called on BA to reverse its 10 per cent pay cut for workers. The Labour peer, 74, a former joint general-secretary of Unite, said: “The recent delays are undoubtedly as a direct result of the opportunism employed by BA slashing jobs, pay and conditions during the pandemic.

“And now, unfortunately, we can all see that the chickens are indeed coming home to roost, with many airlines too slow to rehire and [restore] wages that were stolen from staff under the cover of Covid.”

Delays have largely been caused by staff leaving the industry for good during the height of the pandemic.

Meanwhile, demand for travel will again surge this week, as schools in Scotland and Northern Ireland break up for the summer. The academic year for England and Wales ends in about three weeks.

The Department for Transport’s latest strategy is aimed at avoiding a repeat of the chaos seen at UK airports during the Easter and Platinum Jubilee holidays.

Ministers and officials have been meeting aviation bosses on a weekly basis to discuss summer plans and any issues that could cause problems.

She said: “While the vast majority of passengers across the UK are getting away on their travels with minimal disruption, airports recognise the impact any delay or disruption can have on passengers.

“That is why we share the Government’s ambitions to ensure passengers can enjoy smooth and safe journeys through the summer.”

She added: “Airports are working hard to prepare for this. Recruitment campaigns for security staff are progressing well, with more staff being deployed as they finish their training and security vetting.

“They are also working closely with airlines, the companies managing check-in and baggage on behalf of airlines, as well as the Government and Civil Aviation Authority to alleviate any delays where they do occur and support others in the industry who are coping with staff shortages.”