Each day the Government releases its latest data on the number of coronavirus-related deaths in hospitals. While the figures point to a general downward trend in deaths, today’s figures were significantly higher than in recent days.

However, a graph released by NHS England indicates that the 552 extra fatalities announced this afternoon do not mean there as been a spike in deaths.

The figures released each day for England, Wales, Scotland, and Northern Ireland, give the latest update on the number of deaths recorded.

This is often not the same as the number of people who have died in the past 24 hours.

Some people may have died several days ago but their death has only just been officially registered.

This can occur due to a complication in determining the exact cause of death or due to someone passing away at the weekend, which often causes a delay in the data being collated.

When NHS England announced a further 552 deaths this afternoon, the figure referred to the total number of people who died in hospital in the 24 hours up until 5pm on April 27.

SIGN UP AND PLEDGE YOUR SUPPORT TO OUR BRAVE NHS HEROES 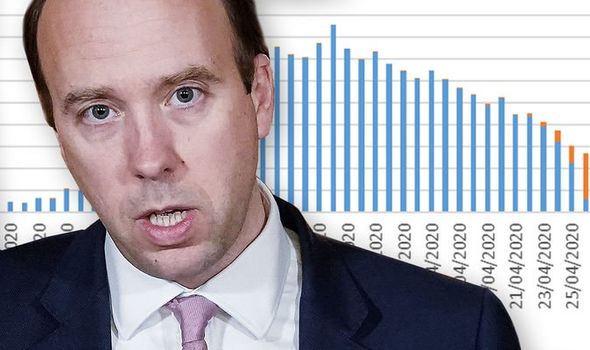 A new chart released by NHS England has re-organised the data up to April 27 to show the number of fatalities based on the day a patient in hospital actually died.

New deaths announced today by NHS England are represented on the bar chart by the colour orange.

Of the 552 deaths announced this afternoon, a large proportion of them were from people who had died over the weekend rather than in the last 24 hours.

The graphic gives a far more positive indication that the Government’s coronavirus lockdown is working.

Compared to the scattered data of the daily recorded deaths, the new chart shows a clear downward trajectory of COVID-19 fatalities.

The drop in the death-rate is a positive indication that the lockdown could soon be lifted. 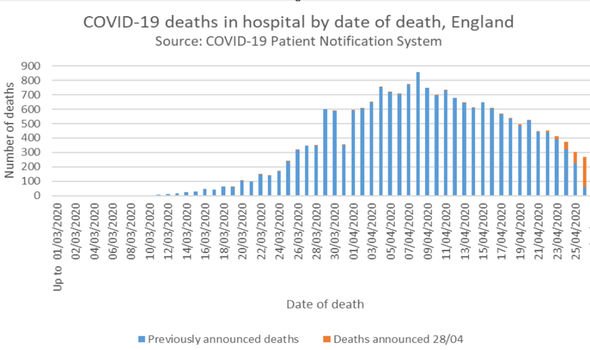 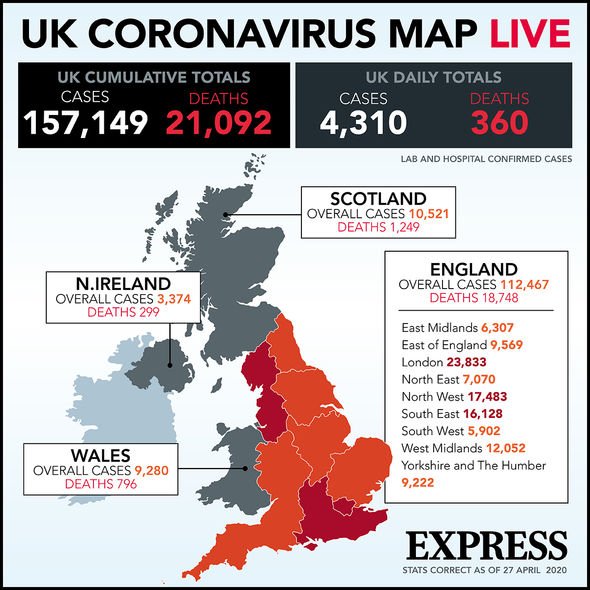 First Secretary of State Dominic Raab announced earlier this month that a “sustained and consistent fall in daily death rates” was one of the five requirements which must be met in order for the Government to relax the current social distancing measures.

The other four were: Making sure the NHS can cope; Reliable data showing the rate of infection is decreasing to manageable levels; Being confident sufficient testing could be carried out; And being confident any adjustments will not risk a second peak.

However, despite the NHS Engalnd graph showing positive drop in the number of coronavirus cases, Matt Hancock has warned “a lot more work needs to be done” before any changes to the lockdown.

He told ITV: “It is too soon safely to make those sorts of adjustments.

“As and when we can of course we’ll explain what we think base on the science are the best new guidelines, but the truth is both the health of the nation and the economy are best served by getting the number of new cases right down. 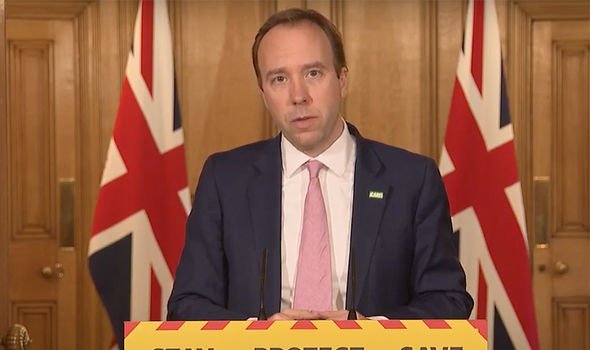 “That is clearly starting to happen, we’ve seen a plateau in the number of new cases, but there’s a lot more work needs to be done.

“I understand the economic concerns but I also know if we get a second peak that’ll be a disaster for peoples and lives and the economy.”

The UK-wide lockdown was first introduced on March 23 for an initial period of three weeks.

It has since been extended by a further four weeks, meaning the country will remain under lockdown until at least May 7.

Ministers have so far refused to explain whether there may be any relaxation of the rules after the first week of May.

The Government has been under increasing pressure over easing the lockdown, with Prime Minister Boris Johnson saying on Monday more would be said about the issue in the coming days.

But Downing Street played down reports the Government will announce its lockdown exit strategy this week.

The Prime Minister’s official spokesman told a Westminster briefing: “We’ve set out that we will review social distancing measures by May 7. The Government is focused upon that date.”