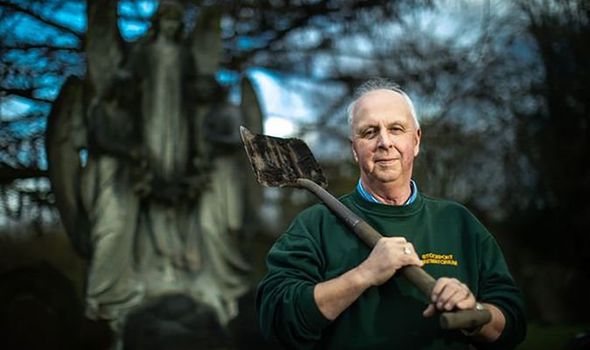 Although Ian hadn’t always planned gravedigging to be his career, it was an opportunity he felt he had to take when made redundant from his furniture shop job in Portwood in July 1983.

He said: “A lad who worked at the crematorium, he said ‘There’s a job going at the cemetery if you’re interested.’ The kids were only young and it’s a job, so I said ‘I’ll give it a go’. That was all them years ago.”

Ian applied and was offered the job, moving into the cemetery lodge to raise his family and begin digging graves by hand.

As reported by the Manchester Evening News, Ian worked alongside 10 others at the cemetery and crematorium but just half remain today and that is not the only thing that has changed.

“When I first started at the cemetery you were digging Monday, Tuesday, Wednesday and you were backfilling Thursday and Friday.

“You could have six or seven burials a day. Now it’s been three weeks since we last had one.”

The highlight of his career was “helping the public”, so much so that he would go out of his way to support people in times of need.

This included working on Christmas Day, Mother’s Day, and other special occasions to keep the ground presentable and empty overflowing bins.

He was also willing to direct visitors to graves in the dark.

“You are doing a service for them,” Ian said. “It’s always been a big thing for us. I’ve taken a lot of pride in it.”

Yet with this pride came sadness and Ian spoke about difficult days digging graves for those younger than himself.

“The worst part of this job is the kiddies and babies who we have buried over the years,” he said.

“It affects you sometimes, I’ve come home in tears because it’s such a sad thing. But you have to get on with things. You have to do a job at the end of the day.”

During his career at Stockport Cemetery Ian has encountered a few strange situations, including a streaker in the 1980s who, like his children, saw the cemetery as a playground and rode around the grounds on a push bike.

He even found a large bag of money hidden in the grounds after a nearby building society was raided in an armed robbery.

On another occasion when emerging from a freshly dug grave hole, he gave a woman ‘the fright of her life’.

Ian, who retired in March, now lives in a small North Yorkshire village with his wife, close to their grandchildren.

When he retired Ian said: “It’s not changed the way I think about death, it’s just one of those things that happens.

“But I’m glad I’m coming to an end with it now, I’ve worked here long enough.”

Yet he will never leave the cemetery behind for good as his parents and mother-in-law are buried there.

Since the lifting of lockdown restrictions, Ian plans to visit Stockport and say goodbye to old pals and reminisce over a drink in the Puss In Boots pub.

For funeral notices in your area visit funeral-notices.co.uk