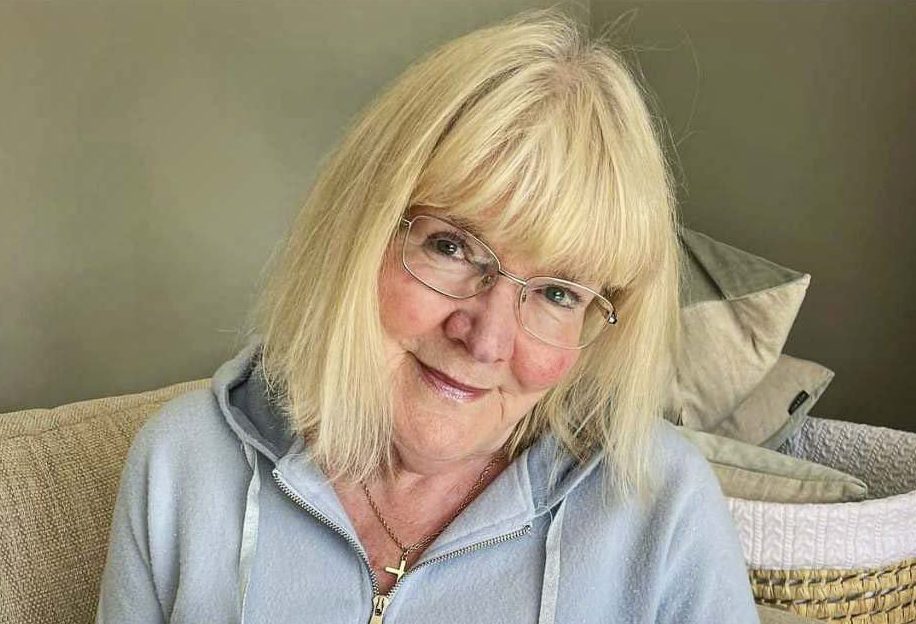 A great-grandmother who broke her hip was taken to hospital on a grit bin lid as she ‘wasn’t eligible’ for an ambulance.

Pamela Rolfe, 79, was walking her doge in a park on December 29 when she fell and passersby helped keep her warm by throwing a duvet on her.

But after the weather took a turn, ambulance call handlers told daughter Dawn Hamilton ‘due to the current crisis at the moment she doesn’t qualify for an ambulance’ in  Johnstown, Wrexham in Wales.

Dawn said: ‘One of the first rules is not to move someone. A man in the park said someone had died on the floor waiting for an ambulance recently.’

As the rain and blustery winds picked up, Dawn, her partner and a neighbour were desperately searching for ways to support the great-gran-of-two.

‘My partner had hired a white van, we were looking for an ironing board to support my mum’s leg,’ Dawn said.

‘A neighbour ripped the lid off a gritting container and put it under my mum.

‘We drove to where the ambulances were in A&E and a paramedic who is also a neighbour helped put her on a trolley.

‘She got through straight away and had an operation the next day. I couldn’t believe A&E, there were queues outside the door.

‘We were told someone was in an ambulance for 24 hours.

‘If my mum had got in an ambulance she would have been stuck outside A&E, she could be dead.’

Dawn thanked the ‘fantastic’ Wrexham Maelor Hospital nurses and paramedics who helped Pamela – but the experience of seeing the NHS creaking under the pressure was hard not to take home.

‘There was a 93-year-old lady in the bed opposite, her son said she fell in her house and broke her hip, they gave up counting after 33 hours of waiting for an ambulance,’ she said.

‘There’s surgeries in Wrexham which are telling people, “go to A&E”. I keep saying to her “you don’t realise how lucky you were”.

‘Just having the van, it was the luck of god that we had a van. The hospital staff were lovely but they are rushed off their feet.’

North Wales for the Welsh Ambulance Service manager Stephen Sheldon said: ‘We are deeply sorry to hear about Mrs Rolfe’s experience, and know how distressing it will have been for her and those around her as they waited for our help.

‘Unfortunately, her experience is not unique, and while that doesn’t lessen the distress for Mrs Rolfe, it is symptomatic of the pressures that all elements of the health and care service in Wales – and across the UK – are facing.’

Sheldon said it’s now ‘uncommon’ for three in 10 ambulance crews to be stuck outside hospitals waiting to hand over patients.

‘This means they are unable to get to patients in the community like Mrs Rolfe, resulting in very long waits for us to arrive,’ he said.

‘This is not the level of service we want to provide and we are working hard to improve things as a matter of urgency.’

Ambulance wait times – from how long one takes to arrive to the time it takes to be dropped off – have reached unprecedented highs.

A 93-year-old left ‘screaming in pain’ on a care home floor as she waited 25 hours. A mum-of-four with cystic fibrosis who died after an 11-hour wait.

The delays are part of a wider breakdown of the NHS, with skyrocketing demand, lack of A&E beds, staff shortages, declining work conditions and a lack of funding stretching the service.

Matthew Taylor, the chief executive of the NHS Confederation, a membership body representing the health sector, said this can’t go on.

‘The reality is that there are no silver bullets here,’ he said yesterday.

‘This crisis has been a decade or more in the making and we are now paying the high price for years of inaction and managed decline.’