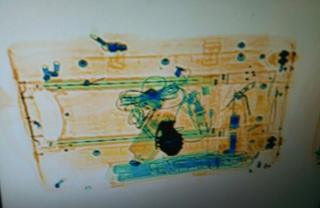 One of Spain’s busiest train stations was partly evacuated after security services spotted what appeared to be a grenade in a passenger’s luggage.

The alarm was raised at Barcelona’s main railway station, Sants, where the woman was boarding a train to Madrid.

But all was not quite as it seemed.

After searching the suitcase, officials discovered the object was in fact a belt buckle shaped like an explosive device. By this time the passenger was already in Madrid.

It is unclear how the woman was able to board the train and travel across the country without being stopped after officials in Barcelona noticed the suspicious “device” during a luggage scan.

But after they realised she had left the station, national police were alerted, news agency AFP said.

The incident caused the evacuation of two high speed trains, as well as a partial shutdown of Sants and the creation of a “security zone” on a platform at Madrid’s Atocha station.

Rail operator Adif said an investigation into the incident and security measures has been launched.

The Catalonian police force said in a tweet: “Services are beginning to be restored at Sants station after various specialist units carried out the appropriate checks.”